So there I was. In the middle of our veggie field...about to plunge my hands into a 55 gallon barrel of manure tea. The occasion can be very much like a near death experience...your life flashes before your eyes...you recall all the many and minute steps that led up to this moment, you 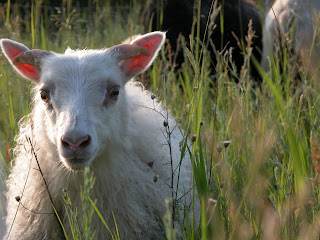 remember your toddlerhood and your mother's voice comes back to you, "no no sweetie! Don't touch poopie!" and you wonder how you got to this point, about to fish bits of straw out of this concoction you've made for fertilizer...a combination of composted sheep and chicken manure, fish fertilizer, and water...and the sun's beating down on you, the waiting veggies wave in the breeze, and a fat bumble bee stops to sit on the lip of the barrel, the only audience to your deliberations and amused pause. Bent over the vat of brown liquid, you inhale the scent of agricultural success, and you find yourself unusually philosophical. 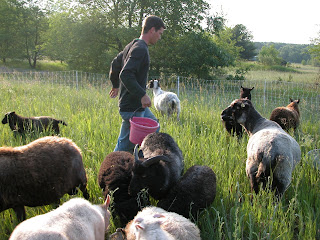 "After all," you muse, "Everybody in this life has to deal day in and day out with some kind of crap. Some take it. Some give it out. I happen to do both...and considering the other kinds that are out there...I think I prefer the kind that ends with bountiful harvests and a full stomach".

So I plunge into the poo juice. Up to the elbows...going from grimace to grin in about 5 seconds.


You can't argue with the results. In veggie farming you really do get what 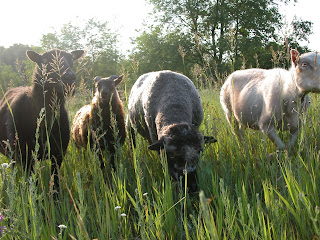 you put in. Some farmers build the soil slowly season after season in a kind of patient marriage with the dirt. It takes a long time to build up humus*, get a nice tilth, and increase fertility...vegetables are voracious eaters! So in the meantime, applications of manure teas (how dainty the term!) give the hungry plants the growth they need....and the farmer applying them feels akin to God. Giving the increase.

Quite a wild ride, this farming thing. The close you get to dirt and the nearer you get to poo, the more you find yourself scraping the bottom floor of heaven.

The other day, bent over beds of cabbage run amuck with clover and queen anne's lace I found it difficult to complain in my usual cream puff way...even though I had put myself to the task of in effect weeding a quarter of an acre. And the only reason was that doubled over so low near the wild herbs and fragrant clover I was distracted by the loveliness of the scent of things as I tore them out of the earth...It was as if the earth, -difficult wench that she can be-was perfuming herself to flirt me out of my self absorption...

Organic farmers often under-sow many crops with clover, seeding it after the tomatoes or what not have gotten a nice start and the clover can grow up underneath to blot out the possibility of weeds and form a green nitrogen fixing manure for when the tomatoes finish...As I tossed the handfuls of uprooted clover into the paths I found myself thinking "sorry darlings! Come in a little later next time and I'll let you stay the season!" 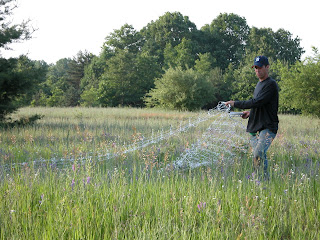 What an amazing power and responsibility the farmer takes on. He decides what vegetation stays and what goes. He organizes sucessions of crops, and chooses different varieties. He is a veritable Pharaoh making grand judgements on his landscape every day. Who can say what shift he is making for the local environment when he uproots a mulberry bush here, plants a pine tree there, sows oats, weeds clover, plants peas. It would be too simplistic to say that he is a marauder, coming upon the natives and displacin 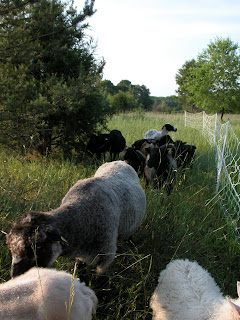 g them to the detriment of the surrounding nature for the sake of his man-made narrowly conceived utopia. So too it would be naive to believe that his actions are of no consequence to the local wildlife, insects, and micro-organisms in the soil...every day is a battle to maintain the balance that is responsible 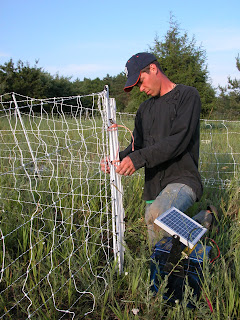 cultivation...destruction that serves growth, decay that produces fecundity...acts of power that pave the way for the gentleness of soil growth and vegetable fruiting.

Pasturing sheep on 11 acres, rotating them with strands of electric netting, I am reminded of this amazing balance that occurs as man makes his mark on a place, literally, creating a patchwork of grazed squares across the acreage in different stages of re-growth, all the while keeping an eye to the grass and to the animal, a respect of the lay of the land and for the needs of the sheep. Here he is, wielding electricity to follow traditional methods of grazing...and all to make the land he utilizes more itself than it would be if it were left un-managed. It is a curious thing; cultivation. 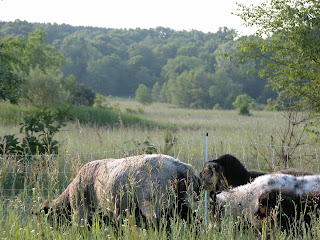 It is a constant dance of doings and non doings...pronounced actions and pregnant pauses. It is music.