It seems strange to say it now, after a week of solid rainfall...but a couple of weeks ago, during that touch and go portion of May, when the grass had not yet made its full come-back and we were experiencing a drought-like spell, we had to hold the steers and cows off the pastures and send them around the yard to mow the lawn instead.

This happened to coincide with apple blossom time and seemed a perfect way to celebrate the beauty of May-time; creating living paintings of bucolic plenty. 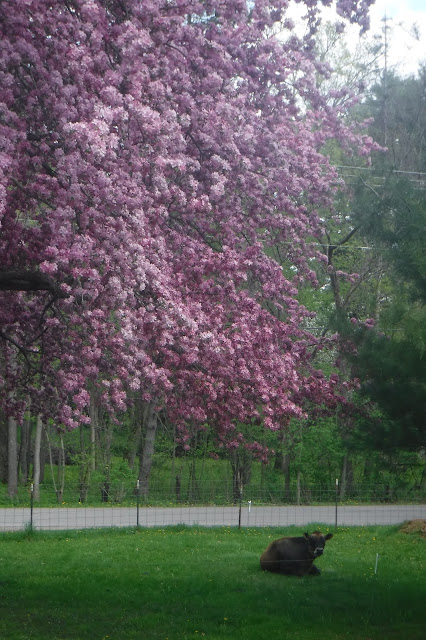 If you grab a camera and frame a cow just so, in the lower right portion of the picture, the blossoming tree a-buzz with honey bees seems to bend over a cow like a corsage on a 1920s southern belle.

And, like F. Scott Fitzgerald's character, Sally Carrol, the afternoon drawls lazily along underneath such a tree, the bovines sprawled leisurely, milky- eyed, regarding everything and nothing with equal passivity, drunk on the heady scent of the blossoms that perfume the air for a short 2 weeks.

Someday, when you are old enough, you'll read it, and then..."

We were at the general store for a candy run, and my 4 year old, clutching a 35 cent candy necklace regarded the older gentleman with interest. I was exchanging small talk with his wife- about how big the kids have gotten, and "where does the time go?" and so on, when mention of St. Paul's famous author caught my attention, especially as it was directed toward my pint-sized daughter. What was it about her, rosy cheeked, braids dangling down her back, that reminded him of Fitzgerald? I wondered. 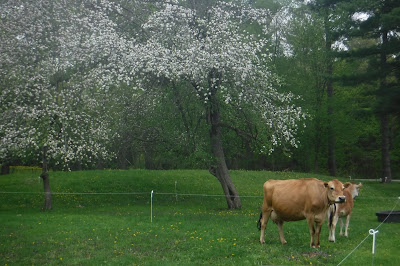 They had been walking homeward between mounds of high-piled snow and under a sun which Sally Carrol scarcely recognized. They passed a little girl done up in  gray wool until  she resembled a small teddy bear, and Sally Carrol could not resist a gasp of maternal appreciation.

"That little girl-did you see her face?"

"It was as red as a little strawberry. Oh, she was cute!"

From "The Ice Palace" by F. Scott Fitzgerald

With a lurch I realized how much I've missed these sorts of random and lovely conversations for well over a year now. With Walz's wand waved, we've been falling in love with people all over again, engaging everyone in banter- from the man in line behind us at the grocery store with the bag of tomatoes, to the usher at church who humanely "bent all the rules for us", to the man who offered to help us up a steep ravine on a local riverside trail, reaching his kind hand out to us like manna descending from the heavens.

As we watch the snap peas poke up through the ground and greet the waving flags of red leaf lettuces, there's a kind of breath and sigh of relief to see old familiar faces again in the garden. How fitting to share real life smiles again with strangers, at such a time, in Spring, when all the earth seems to gently nudge the heart to remember deeper invisible realities like hope, love, goodness, and beauty.

"I think they're growing like Swedes- Ibsenesque, you know. Very gradually getting gloomy and melancholy. It's these long winters. Ever read any Ibsen?"

She shook her head.

"Well, you find in his characters a certain brooding rigidity. They're righteous, narrow, and cheerless, without infinite possibilities for great sorrow or joy."

from "The Ice Palace" by F. Scott Fitzgerald 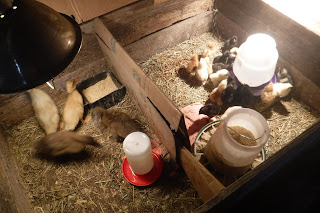 Here's to spring. And to opening up again to possibilities for great sorrow and joy.