Yes. I know. Snow is on the Horizon. Here. in Mid-April.
Here's what you do. Whip up a batch of chocolate chip cookies, brew some tea, and feast your eyes on some cute baby goat pictures. Repeat after me: "BABY GOATS = SPRING! Spring IS here!" Old timers used to say that snow in spring is simply the good Lord's way of sending a nice little dusting of nature's fertilizer on the waiting veggie fields....
Both Bluebelle and I have been waddling about big as houses recently. We’ve been both expecting Spring babies…and finally last Tuesday she beat me to it and delivered twins, a doe and buckling. 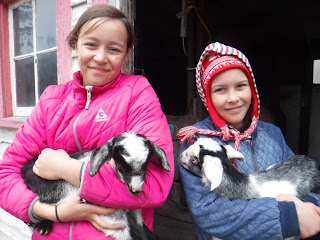 She surprised us with a mid-day birthing, and by the time we found them in the barn the babies were dry and sprightly, though one had slipped under the goat pen door and was at risk for being rejected by Bluebelle who had forgotten her first (and most strapping) twin in the haze of delivering the second, licking her dry, and delivering the placenta. It took his tenacity and our regular forcing a latch on while keeping her penned into a kidding jug for a few days to bring about a happy reclaiming of him on her part. Bluebelle is an old pro, and it was just like her to eventually make it easier on us and not require us to bottle feed her plucky little kid. 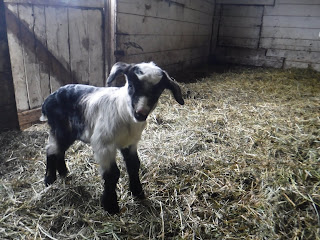 It takes about a week for the milk to come fully in and the bitter taste of colostrum to disappear. That’s when we begin milking in earnest and making cheese. We rear kids on their dams, and simply separate them at night so as to take the morning milking, leaving the rest for the growing babies. Some say this results in wilder goats later on, but we prefer this method because it is healthier for the kids, and in our experience bottle-fed babies pick up all kinds of bad habits from their human sympathizers. It’s often easier to train an animal with their natural instincts intact, than to cope with a spoiled animal always nibbling at your hand for treats and crying pitifully when you leave the barn. 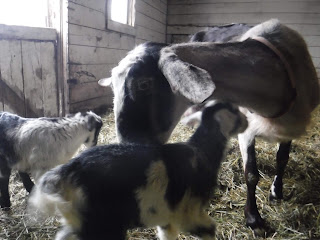 Our resident two year old had forgotten the many days we spent last year milking in the early morning in the barn, and when she saw me sitting on the stool behind Bluebelle, she squeezed my arm and exclaimed “Brave Mama!” with eyes shining with admiration. It’s quite something to be squat-sitting on a low stool heavy with a child almost 9 months in utero, behind a goat, squeezing away as you smell the hay, the wet earth, manure, and the breath of the doe standing on her hind legs leaning over the door behind you waiting her turn, when suddenly, you find yourself exalted, rocketed even, to super-hero status in the eyes of one of your children. Perhaps the ladder to transcendence really is made of the hummusy stuff of smaller humbler realities. “From the mouths of babes” they say, come wisdom and truth…so can it be then, that filling a stainless-steel bucket with warm milk from an udder I milk with my own hands be an amazing act? Maybe it’s another one of those every day Spring miracles we take for granted…how suddenly fortunate I feel to partake in it…and share it with child standing next to me  in muddy black rubber boots grinning away and the little one within, kicking me in the ribs and hiccupping.


If you’ve pre-ordered look for an email for your start date and drop-site. 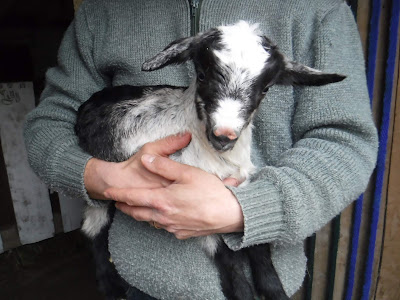 Senior Staff Scientist for Friends of the Earth published an article recently in the MOSES Organic Broadcaster, detailing a study conducted by researchers led by University of California-Berkely and Friends of the Earth. Conducted nationwide, participants from Minneapolis contributed to the study. It showed that pesticide levels found in study participants dropped by 60.5% after just 6 days of eating an all-organic diet.
Read the study HERE.


At the end of her article she lists the things we can do with this knowledge:


“We can work together to pass laws in our cities, states, and nationally that decrease pesticide use and expand organic farming….We can support farmers markets, CSAs, and independent retailers and food companies that source from local, organic growers. Together, we can demand that our leaders step up and shift supports, research, and policies to create a system where organic is for all.”


News about toxins building up in your kids’ brains is scary stuff.


But we humbly propose that mega organic farms are not the solution. Small diversified farms (the kind of your great gran’s day in the 30s and 40s) are the answer to poor soil health, chemical inputs, and destruction of social fabric. A small farm allows the farmer to keep his boot on every piece of ground. Beyond keeping chemicals off of his land, rotating animals and using their manures and time-cured compost piles for on-farm sources of fertility increases the nutrients accessible to the plants growing and fruiting in the soil. We are always amazed at how we can fill up on vegetables in the summer here on the farm, and feel more satisfied on an all veggie-stir fry than on a winter stew made with store bought produce and meat.
Give it a go yourself. Sign up for a Farm Share this season and keep us growing and going on this St. Croix River Valley farm! Order forms can be found on our side bar page.
*We do not believe the USDA sets the Organic Agriculture bar high enough. While we are not certified organic, we do not use any chemical fertilizers or insecticides on our fields. Our farm is surrounded by a buffer zone of forest and grassland here on the bluffs of the St. Croix River. We use on-farm sources of fertility such as leaves, compost, goat and chicken manure applied in fall and early spring, and crops tilled in for green manures which boost soil health. We tackle insect problems with floating row covers, healthy soil which gives plants the strength they need to resist issues, and planting flowers and shrubs which attract beneficial pollinators and predator insects. We like to say that our farm goes BEYOND ORGANIC.*
Posted by Mr.and Mrs. Farmer at 8:27 AM No comments:


World leaders get in virtual fist fights on twitter.


NBA players are depressed because of too much time on facebook.


And we’ve all experienced the private and work-place squabbles aired in mass emails and via other electronic means of gossip and slander.


Our answer to all this (aside from not having cell phones or internet at our farm) has always been to make bread.


Bread and Libel are similar. You take practically nothing and make something sensational with it. The difference is, while in character defamation you are tearing somebody down, in proffering bread you are literally building a body up.


My first success with a sourdough starter came when I read Chad Robertson (of Tartine, San Francisco fame) talking about how you’ve got to mix your flour and water with your very own hands. The baker has to get his hands dirty, to give something of (off of!) himself to make for fostering that wonderfully vibrant world of micro-organisms that will naturally leaven a loaf and lend the unique aroma and taste of your own home place.


In dealing with dough, all the things required of a mature adult when one is slammed on social media, or disgruntled by the recent newsfeed are exercised: patience, time, rest, observation, careful measurement and deliberation, kneading (or folding)- which can be cathartic and feel like taking out aggression while in actuality it is the building up of something-namely gluten to create good rise and crumb.


Like farming, making bread is a matter of setting up the conditions for favorable growth, and regularly checking in to lend a timely hand to the process that will never cease to humble and amaze as the magic of life and the internal design of living things manifests itself in new creations and fruition.


It’s a much better alternative to crafting a scathing reply on your iphone.


First you start making bread, and then you begin to be bread.


“Give yourself….You must be as good as bread, which for everyone rests on the table and from which everyone, if hungry, may cut himself a piece for nourishment.”


St. Albert Chmielowski, was a one-legged painter turned Franciscan. Born in Poland, he lost a leg in an uprising in 1863 and became a prisoner of war, narrowly escaping exile to Siberia and the death penalty. He then became a painter in Paris and Munich, and then, eventually became disenchanted with the never-ending race to achieve self-fulfillment through talent, something which he called the “most foolish and despicable form of idolatry”.  He became inspired by Francis of Assisi and his call to “rebuild the church”. He began to repair and renovate neglected wayside shrines, and preserve ancient oil paintings in the churches of Poland. 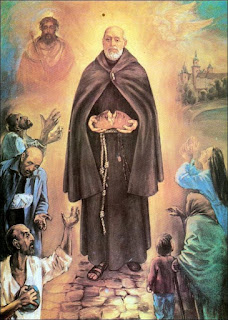 “I can no longer stand the evil which the world feeds us. I can no longer wear the heavy chain. The world like a thief strips the heart of everything that is good; every day and every hour it pilfers love from people and steals serenity and happiness…”


Soon he was taking in the homeless into his own small studio apartment. Many of them were fellow war veterans. Eventually he went to live among the poor in filthy municipal shelters, where the conditions were morally and physically wretched.  saying:


“To prop up a wobbly table, you cannot weight it down at the top; you have to stoop down and support it from the bottom. The same is true of human indigence. To save the poor you must avoid burdening them with reprimands, rebukes, and sermons on morality, while you are well-fed and well-dressed; you must become poorer than the poorest among them in order to lift them up.”


This was a guy who made a lot of bread. He’s an inspiration for our farm because his quest for beauty in art led him to the beauty in his fellow human beings, and the call to nourish it, and thus nourish his own soul.


We are currently offering bread for special order. Contact us via email for details. We are making weekly deliveries to the Twin Cities and suburbs.


Our regular Bread Share program is something we are gearing up for the Winter season, when the fields and animals require less of our attention. Our farmhouse sourdough is rapidly becoming our signature bread, which fits with our sustainable farming philosophy. Sourdough is the perfect compliment to  vegetables harvested fresh on nutrient dense local ground without the aid of chemicals. Baking with naturally leavened dough is a way to both respect the grain and the body’s health.


“Baking with natural leaven is in harmony with nature and maintains the integrity and nutrition of the cereal grains used….The process helps to increase and reinforce our body’s absorption of the cereal’s nutrients. Unlike yeasted bread that diminishes, even destroys much of the grains’s nutritional value, naturally leavend bread does not stale and, as it ages, maintains it original moisture much longer.”


“May you never be without bread,


May you always be as good as bread.


May you ever be as sustaining as bread


May you allow others to cut you as bread.”
-Br. Albert

Thank you to The Apiary Salon! 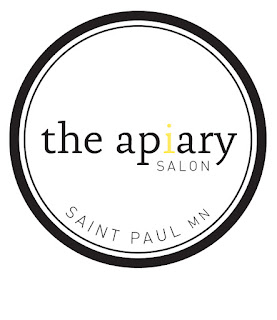 Check out the Apiary at http://www.theapiarysalon.com/