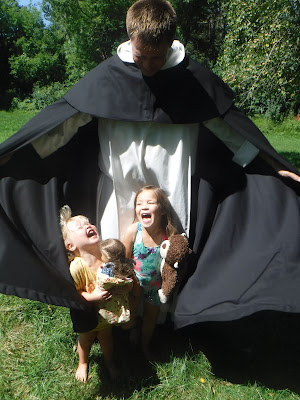 We had an old family friend visiting us and helping with the harvest this past week on the farm.

Our old college friend John towers over most folks at 6.5 feet. Born and bred in Montana, he is now a newly ordained Dominican priest for the Western Province. We told the little ones that giants still do exist here and there, though over time their size has shrunk to under 9 ft in most cases…and when he arrived, he did not disappoint!

We stopped at the County Fairgrounds to pick up our exhibits, ribbons, and premium checks. Father John trailed behind me helping me carry off our awards and vases and items, his arms filled with needlework, artwork, a jar of bread and butter pickles…I soon realized we were attracting some attention. It’s hard to miss a grinning 6.5 ft Dominican brother in a bright and shining bond white habit.

He told us how one time he was mistaken for a member of the Illuminati. But the observer called out “Oh wait! No! He can’t be Illuminati! He’s too happy!”

Dominicans have O.P. after their name- for “Order of Preachers”. Their work is to preach- and to diligently study in preparation for doing so….hence, the absence of a work habit. 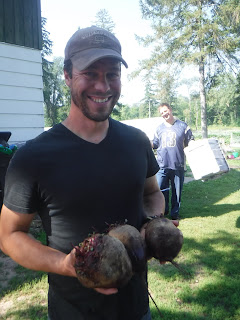 One day one we had him harvesting zuchinni with us in the field. Shane and the older girls had been up in the BWCA the week before, and we missed a day of harvesting the summer squash. In the interim some of them had expanded to the size of small dogs. “Just go and throw those monstrosities to the pigs!” I told him. It had rained in the night and the hogs were enjoying sunbathing in their little mushes of mud and muck. I looked over to see Father John lobbing squashes to the happy and salivating porcine torpedoes eagerly awaiting their mid-day feast. Each one landed with a delicious THUD and THWUCK, hitting the ground with truly impressive power.

Father turned back to us grinning, his duty discharged, but his snow white habit looking as if he was riddled with holes.

“Don’t worry! This is why we carry Tide pens!” He assured us.

Farming has a way of changing people. It can transform some folks in the matter of one afternoon. Still. I’d hate for him to be mistaken for a Holstein. “There’s no way he’s a Holstein!” they’d shout, “He’s too happy!”

The Power of Love

“ We had a mad friend once, a Jewish worker from the East Side, who wore a rosary around his neck and came to us reciting the Psalms in Hebrew. He stayed with us for weeks at a time, for although mad, he had the gentleness of St. Francis. He helped in our garden on Staten Island, and he liked to walk around in his bare feet. “I can feel things growing,” he said. “I look at the little plants, and I draw them up out of the earth with the power of love in my eyes.””

In order to keep up with the harvest and keep the plants healthy and productive, we harvest green beans on Mondays and Fridays and sometimes in between for our own freezer’s supply and farm-stand surplus sales.) This past Friday we had spent the morning harvesting zucs and cucs and beans when the lunch hour arrived and the heat became oppressive. 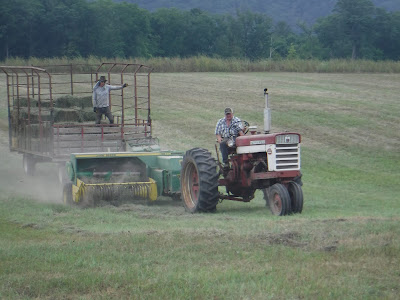 We had just decided on taking a noon siesta when there was a honk from our driveway. Our neighbor Wally was ready to bale 2nd cutting hay. He usually makes large round bales, but obliges us with small squares if Shane does the stacking on the wagon as the kick baler sends them back. 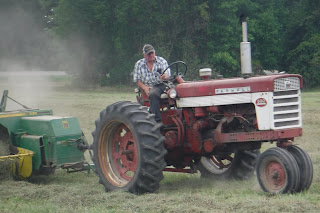 Haymaking is one of the most enjoyable chores. Yes it’s hot, sticky, dusty, pieces of grass stuck to your face, down your shirt….yet I’ve seen men wilted from a morning’s labor in the field suddenly revive with whip-like joy fresh as daisies when a man with a tractor shows up and says the hay’s ready. 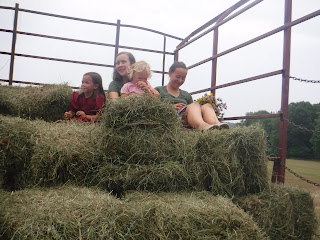 First there’s the pure joy of riding in an open field of grass, the smell of the curing windrows wafting up as you pass, the baler combing the rows up into itself, a blue sky above. The unhurried tractor’s pace as it secures free food from the rolling landscape. Another hay crop in means another year of meat and milk, thousands of dollars secured from the gracious sun itself, and at the courtesy of rain and the good Lord above.

It’s a draught year, so the field that gave 110 bales last year only yields 61 this year. Still. We had dry weather to make it in. The red clover in it cured well. It holds its shape when squeezed and doesn’t shatter into dust. Wally’s done a good job. But then, he’s had practice! 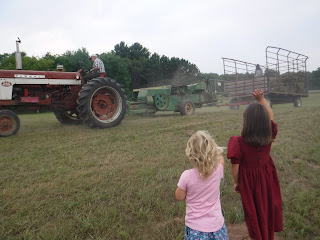 I trudge out to the middle of the field with the 4 year old and 2 year old who are in awe of the whole process. We’re carrying a giant jug of cold water for the man in the wagon, stacking bales, with his shirt over his head Arab-style to keep the sun off his neck. 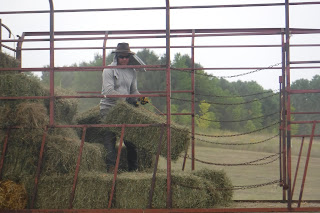 “Want some water, Wally?” we ask. He shakes his head no.

“How old are you Wally?” I’m leaning on the giant deeply treaded tractor wheel. The word comes out long and exaggerated.

“And you’re still at it!” I grin with admiration.

“We—ll, I figure the day you stop, you ight as well drive yourself to the mortuary!” He smiles.

It’s 3:00 in the afternoon and 96 degrees outside.I take one more look up at the brown and crinkled face with the stubborn chin and faded ball cap. I am not made of the same stuff as he, and head back from the shade of the trees on the edge of the field as he starts up his tractor again, but I know the feeling he described. 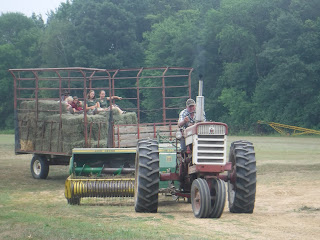 Every spring and summer the very smell of the earth thawing pulls me into planting again. I’ve become aware that the day I don’t mark a new season with seeding will be the day I die- or might as well do. Though some days this existence seems like a fight for survival, we all know deep down it’s more like a dance. We head back to the house for some lemonade before we load our 61 bales into the barn. 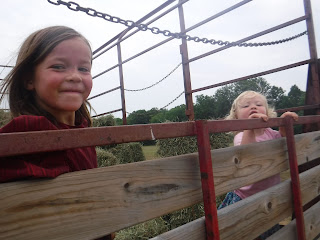 Wally is off to help another farmer get his crop in late into the evening before the midnight thunderstorm arrives. It’s still 96 degrees, he’s still 83 with lung cancer, but the hay is ready to bale, and hay making is a beautiful thing.