Ron was a man I never saw without his hickory striped over-alls. They were as a part of him as his raspy cough and kind eyes. They had a pocket with a zipper in the front. That was the very pocket "Nugget" played with as a foal 14 years ago when he first saw the little Tennessee Walker in a field.

But Ron soon lost interest in the mare he had come to see, and fixed his attention and his gentle ways on the youngster. Pretty soon she was eating out of his hand and following him around the field. 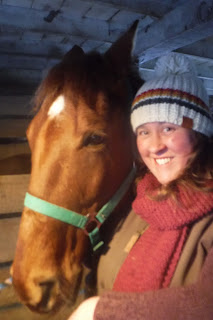 I remember looking at the man when he said it. He seemed entirely unaware that the little chestnut mare picked him because he first had faith in her- he had picked her. He had the humility that comes with decades of dealing with large animals, the rootedness that kills common ego issues in their cradle, and that comes from looking out over the same fields he had done as a kid, when at the ripe old age of 5 he sat astride a mammoth black Percheron, his baby fingers with that reassuring gentle grasp on the reins...he had enough to give, and he gave it....so...she kind-a picked him.

"Don't worry about that cough" his wife explained, lest we fear contamination in this age of the virus, "he's always had that..."

It was easy to forget what was going on in the outside world, here on their farm. The handshake was still there. The sun was shining. There was no trace of fear- of- the- other.

The week before Thanksgiving, after nearly 9 months of disinfecting, hand-washing like Mabeth's wife, and sneezing over sanitizer squirts, we found that a serious contagious disease had been hiding in plain sight on our own farm, and had infected our dairy goat herd. CL can stay dormant a long while before manifesting itself. We suspect we contracted it when our goats were staying with friends during our brief wild goose chase back down to FL for grad studies... 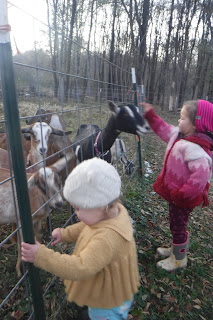 2 days after we put down each and every one of our goats, and buried them in a compost pile that will not be used for at least a year, the telephone rang. It was Ron's bride.

"Ron died....and I want to ask you something. We wanted you to have Nugget. It's what he wanted. Just a couple days before he died he said he thought your family and Nugget belonged to each-other, and asked me if we couldn't work something out."

His quiet ways, his firm, but gentle hand of reassurance, the way all the animals seemed to calm in his presence. His manner which said "I am no fool, but I'll suffer them gladly for their sake!" His voice with the raspy cough. All these came back to me in a flood.

There was soft weeping on the other end. "Yes. I did."

Ron had died doing chores. Just dropped right down behind his truck, with his hand clutching at the breast pocket with the zipper. Turned out the raspy cough was a symptom of congestive heart failure. Due to the panic this pandemic had put everyone in,  no one was going in for appointments. Their hospital was laying off staff right and left, and had kept pushing his heart appointment off later and later....he died the morning of his 8:00 appointment.

The amount of hay in our barn after culling our dairy herd, was just right to overwinter a horse.

Suddenly it seemed like what had been just a senseless waste served some purpose.

A week before his funeral, I drove Ron's truck and trailer to our farm. It was surreal, sitting in his seat, adjusting the mirrors, pushing aside his old hat, his glasses, gloves. She was nervous with the cow in the stall beside her, cat's dropping onto her manger at night from the hay loft above, the sounds of toddlers skimming snow in sleds....

But when the "littles" came to say goodnight to the "Pony" in the barn under the light of one bulb, I watched with awe as she bent her head down to the level of our resident one- year old for a nice chubby-fingered scratch on the forehead. It gave the impression of a deep curtsey and a deep courtesy. 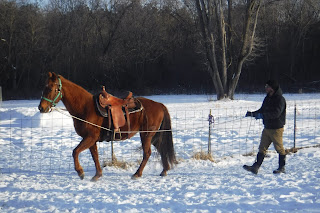 I know at first blush it doesn't make much sense, trying to teach a fancy- stepping Tennesee Walker with  the attitude of a "fine lady" to work under harness, and drag farm equipment around, but we're going to try it, because at the end of the day, these days, everybody just wants a job to do, and she's no different. I don't know why Ron picked us...but I do know that the first day I met "Lady Nugget Muffin" I had the feeling that she kind-a picked us. I guess he knew that.

When you are training horses the trick is to remain calm, though all hell breaks loose around you. A lot can seem like hell to a prey animal like the horse. Even stuff that isn't- like a man on a bicycle, or a chicken stretching her wings. Don't judge her reaction harshly. Don't react yourself. The one fixed point of stability and quiet must be.....you.

From a man who writes as if he's always on the cutting edge....

One of the articles in Reclaiming Politics (IC#30)
Originally published in Fall/Winter 1991 on page 62
Copyright (c)1991, 1996 by Context Institute

Love the quick profit, the annual raise,
vacation with pay. Want more
of everything ready-made. Be afraid
to know your neighbors and to die.
And you will have a window in your head.
Not even your future will be a mystery
any more. Your mind will be punched in a card
and shut away in a little drawer.
When they want you to buy something
they will call you. When they want you
to die for profit they will let you know.

So, friends, every day do something
that won’t compute. Love the Lord.
Love the world. Work for nothing.
Take all that you have and be poor.
Love someone who does not deserve it.
Denounce the government and embrace
the flag. Hope to live in that free
republic for which it stands.
Give your approval to all you cannot
understand. Praise ignorance, for what man
has not encountered he has not destroyed.

Ask the questions that have no answers.
Invest in the millennium. Plant sequoias.
Say that your main crop is the forest
that you did not plant,
that you will not live to harvest.
Say that the leaves are harvested
when they have rotted into the mold.
Call that profit. Prophesy such returns.

Put your faith in the two inches of humus
that will build under the trees
every thousand years.
Listen to carrion – put your ear
close, and hear the faint chattering
of the songs that are to come.
Expect the end of the world. Laugh.
Laughter is immeasurable. Be joyful
though you have considered all the facts.
So long as women do not go cheap
for power, please women more than men.
Ask yourself: Will this satisfy
a woman satisfied to bear a child?
Will this disturb the sleep
of a woman near to giving birth?

Go with your love to the fields.
Lie down in the shade. Rest your head
in her lap. Swear allegiance
to what is nighest your thoughts.
As soon as the generals and the politicos
can predict the motions of your mind,
lose it. Leave it as a sign
to mark the false trail, the way
you didn’t go. Be like the fox
who makes more tracks than necessary,
some in the wrong direction.
Practice resurrection.

Manifesto: The Mad Farmer Liberation Front” from The Country of Marriage, copyright © 1973 by Wendell Berry, reprinted by permission of Harcourt Brace Jovanovich, Inc.