There is a beautiful German folksong we sing every Advent called “Maria walks amid the thorn”. It has the sound of a clockwork chime when you sing it in harmony. We learned it from Maria Von Trapp (of Sound of Music fame,) who included it in her book “Around the year with the Trapp Family…keeping the feasts and seasons of the Christian year”. 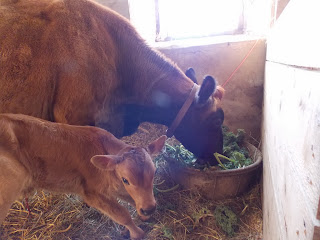 
It is a song about the blossoming of the extraordinary amidst the ordinary, common, and even ugly. It is the perfect welcome to Winter, when the landscape is barren and desolate…and the ground is cold and hard.  The best surprises are usually preceded by a gentle expectation of fittingness that something delightful is at hand. It is a strange thing to try and convey….because it would seem that this expectation would diminish the surprise…but it doesn’t, it cushions it…or readies the heart for it, like a mother with a set of swaddling blankets and a bassinet readies a home for a baby. Sometimes I wonder if this readiness brings the delight on…like a self-fulfilling prophecy. It is always present amidst the ordinary, and it is characterized by a willingness to believe that something beautiful can come from ordinary life. I have fallen in love three times this way. Once, when I was told I would be picked up from the airport by a young man named Luke, once while singing “Red is the Rose” at a choral concert, and lastly, when a friend suggested we play a game of doubles with his tennis playing roommate. In each case I knew the end result would be falling in love, and so it was. The first resulted in tears and poetry surprising me wherever I looked, the second in two years of correspondence and soul-friendship, and the third in a marriage proposal (which I happily accepted.) 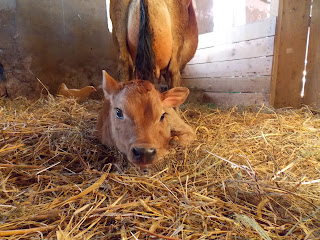 “What neath her heart does Mary bear?


A little child does Mary bear


Beneath her heart he nestles there


It was the same way when we spotted the little bird’s nest on our way down to our favorite sledding hill. It was nestled in the branches of a patch of thorny underbrush. It seemed to crown the thorny canes, and was position in such a way as to have the peculiar effect of a lamp-post beside our path, welcoming us to the dip and dell which funneled us to the very best sledding on the farm. Even at a distance I knew the nest would be special…that soft “about to fall in love” fog stole over me…and over Bothilde who asked “Can we just take it down to look and then put it right back?” I eagerly assented and as we drew near we could see fluffy feathers interwoven in the outside of the nest….it was a cup of a thing, fitting perfectly in the palm of my hand…and most wonderfully of all it was filled to the brim with little red-brown nuts. The intention of it was overwhelming in the tundra-like barren surroundings. Here we were, wind whipped on a lower hillside, with not a sound of birds to be heard, and yet we had stumbled upon a little bird’s larder…and been surprised by the intent industry of a little creature made of feathers and brittle bones, with a heart beating fast beneath its stalwart breast, bearing in its beak carefully foraged fodder…it was as if she had left a note for us to read: “I will be back! Keep it safe for me the while!” We replaced it a-top it’s thorny perch. The ugliness of the branches, the nastiness of the thorns and the completely surprising beauty of a nest filled with dried berries and nuts was heartening…it made us believe that all good things came from briar patches or similar seeming desolation and ordinary ugliness. 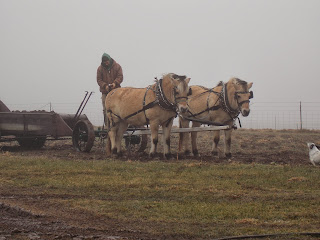 “And as the two are passing near,


Lo! Roses on the thorns appear!


Lo, roses on the thorns appear!


Anyone with a spouse will understand this paradox. There are few sweeter things in this world than a heartfelt apology from a spouse that loves you deeply and has hurt you deeply. I think it’s because there is something of your wedding night in a true apology: there is gentle humility that perseveres because of a vow however freshly made or old. One minute you are fuming at the sink, with your arms up to the elbows in sudsy water, using your anger as a scrubbing pad to remove all stubborn stains, and the next you are softened and changed, dissolved in the warmth of contrition, realization, and forgiveness. It seems to be part and parcel of the roses of life that they bloom amid thorns. Even the sledding hill itself, which was murder in summer to climb when seeking a wandering dairy cow or straying pregnant goat becomes the stuff of ballads with a fresh powdery blanket of snow over it. The terrain you grumbled and grunted over not a month ago now incites fresh squeals and giggles from adults and children alike, as we fold ourselves up in little plastic sleds, grab out courage with two mittened hands and plunge down the hillside. 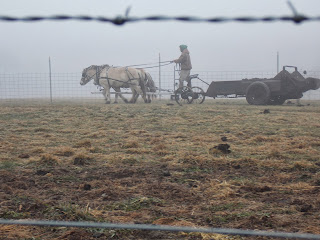 Given a chance, I think most everything in this funny world of ours can inspire and enthrall. You certainly don’t have to live on a farm to see this. The way light can spill in through a window all over a wood floor is enough to rouse gratitude in the human heart…and it is that gratitude that makes the atheist nervous. Because there must be someone to thank! 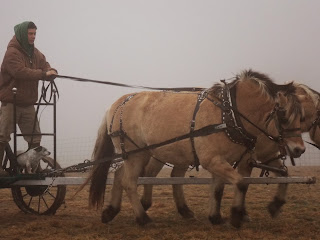 Before we came upon the nest, we had passed the sheep returning from their daily sojourns, grazing through the snow on the Northern slope. They paused at the remnants of the piles of hay Shane had tossed out to them this morning on the future CSA veggie field that lays just Northeast of the barn. (This is part of our Winter manure spreading…and is much easier on our backs this way, letting the droppings lay where they may in a carefully choreographed fertilizer ballet). I was tugging the girls in the big black sled and we stopped to look at the sheep, just as they stopped to look at us. Each one was different. I was transfixed by the unique face of each sheep, and what had been before “ye old herd of white blobs” was suddenly transformed into 26 funny little characters. There was freckled face “Conchita” the short squat one from Mexico, and “Madame Pierrot” the elegant one with black lipstick and a Elizabeth the Second collar of ruffled wool. “Angelica” had a soft white face fringed with pink ears, pink nose and mouth. 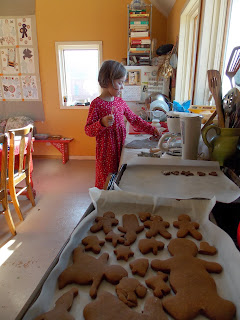 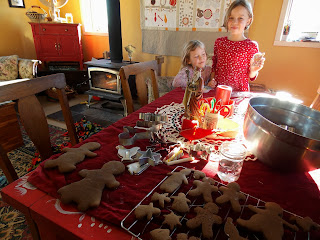 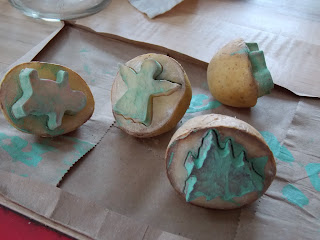 Yesterday we were over a neighbor’s house to see about his restored Canadian Cutter, and pulling it with the Fjords this Christmas season. The cutter was beautifully rosemalled with roses and pansies and sprays of baby’s breath. The human heart always stop short and breaths more deeply when abruptly confronted with such beautifully detailed work. Work which signifies time standing still for the artist while painting it…the kind of standing still that requires love and defies counting. Over cocoa and peffernuse he confided that he finds nowadays that he has “a lot of money and little time”. He has exchanged one for the other for 34 years of his life, and now suspects the deal too raw to continue…it was something of the same observation I stumbled upon house later when we stood in front of the flock of sheep and it suddenly struck me that the pause is what gave me the moment of recognition and nod to the wonderful individuality of the flock.
Had I not halted the march of boots through snow, I would not have known them enough to love them that afternoon. For a farmer, it is his knowledge of the farm that keeps him hanging on to it: the knowledge of where the grass grows thickest (and thinnest) and which blossoms gave the honey that flavor this year, and where the black raspberries grow, and where the asparagus hides, wild in the Springtime. Other kinds of knowledge, like how to turn a hayloft into children’s laughter, or make a hobbit hole out of a hillside, or find adventure down a woodland path not tried…those kinds of knowledge too, tie the knower to the known. Knowledge is the wool that Love is spun out of. 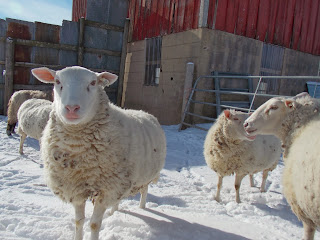 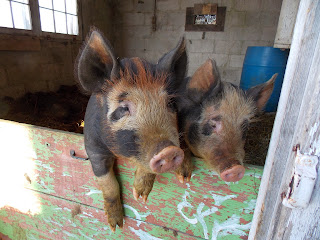 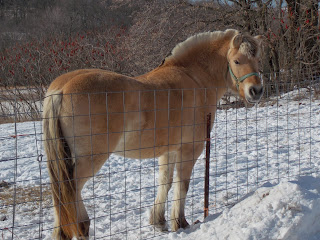 In the Advent hymn, we mutter “Lord have mercy” as we peer into the gentle mystery of the incarnation. The rose has thorns…but the rose gives the why to the thorns. Perhaps the reason why there was no room at the inn, in the ancestral town of Joseph, filled no doubt to the brim with relatives of his who could have offered at least a floor to sleep on, was because the coming of Jesus Christ into the world seemed very much to those without “eyes to see” the birth of a bastard child. But belief born of a waiting and expectant heart, eager to see in the ordinary something extraordinary and beautiful, sees the “fatherless” child fathered by a Father more Father than any, and from whom Fatherhood receives its name. The Prince of the Universe turned the world on its head when he was born in a barn, with ox and ass as courtiers. He greeted us with a baby’s coo as the “Son of He who delights unexpectedly!” Forever after giving royal dignity to poverty, and making ballrooms out of barnyards.
Posted by Mr.and Mrs. Farmer at 10:46 AM 3 comments: