"Baka"=polish for "Grandma"
Last weekend we buried Farmer Nathan's Grandma beneath a layer of sod and a few feet of our Southwest Michigan sandy soil. A few days earlier 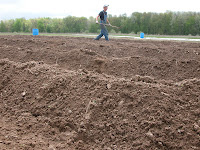 Nathan had left the field, with its new seedings, young plantings, and hills of potatoes to help dig his Baka's grave.
Before we began farming, the cavernous hole of a grave was an ominous thing to me. Its depth and emptiness seemed a gaping mouth, ready to swallow the prey of time. I have stood beside the graves of the old and of the far too young, and each time the lowering of the casket beneath the sod, down into the moist and ready earth seemed such a foreign action to me, such a break from the rest of the rushing forwardness of life. But I have grown accustomed to burying things. I have seen too many resurrections of the seed, first covered over in dirt, then awakening to sunlight and growing glory, to fear the first step of burial. I see the continuity now, where before was only the abrupt confrontation of stillness and heaviness with life and light.
All us, the young and the old, tossed shovelfuls of soil on top of the coffin...great-grandchildren leaned into their digging with a solemn concentration moving to see...they had learned from their Baka to delight in God's green earth, and to tend its fruits assiduously with gratitude and perseverance...and now the sight of the straight edges of the grave was not something jolting and swallowing...the soil revealed in its layers, the sod, cut away to form the hole, the pile of sand next to it...it was like greeting an old friend. For the first time I was able to commend a loved one into the waiting arms of familiar dirt. Take this woman, earth that I hold so dear, I have poured many long hours of labor, sweat, and seed into you, and now I give you my most precious seed of all. I bury her here beneath you, and in you, and I await with faith those first green shoots of an eternal Spring.
Posted by Mr.and Mrs. Farmer at 5:19 AM