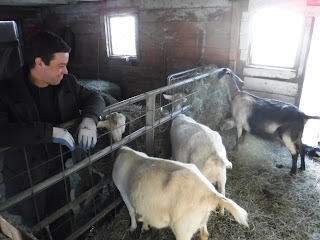 Recently I read a Wall Street Journal article which states that according to USDA stats, 82% of U.S. farm household income is expected to come from off-farm work this year. One farmer interviewed wakes up at 4:30 am 4 days a week to drive an hour to a 10 hour shift inspecting rail cars in need of repairs. 6 months out of the year he then drives home to tend 350 acres of corn and soybeans and spends his weekends managing a small herd of cattle.


“For now, Mr. Morrow said, he is content- he doesn’t like to sit still and thinks farm life teaches his sons good values and a strong work ethic.”


I knew a man in Wisconsin, a retired veggie CSA farmer whose farm was bought out by a non-profit. He said there should be a support group for people who have the “farming addiction.” Even after moving his farm and retiring he was still raising beef and dairy cattle, goats, and enough veggies to sell to a CSA and wholesale.
There are times when I think he’s right. We sound like veritable lunatics when we try to explain about intangibles like “good values” and “work ethic” while barely scraping by financially. But one has only to continue to page through a newspaper to find that dirt farmers aren’t the only zany ones out there- it seems to be a condition of the human race, and there are all kinds of crazy. 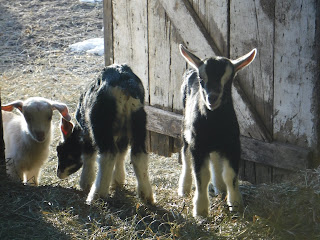 In that same paper, a few pages later, is a story about a New York lawyer who pays $175/ hour for a weekly session with veteran contortionist Jonathan Nosan. The pictures show him gleefully squatting, in a handstand, and pressed down with a 45 pound weight. So while we read disinterestedly about a guy working 12-16 hour days managing 600 acres in crops and beef cattle, and taking on another job as a rural mail carrier, there’s another guy in New York so much smarter than all that making thousands and thousands of dollars as a lawyer and responsibly ingesting raw fruits and veggies for breakfast, seltzer water in between, nuts for snack, salad for lunch, and an omelet for dinner to stay limber for his “Contorture Training” workout. “I’m doing it for its own aesthetic and own benefit.” He told the Wall Street Journal.


It’s undeniably more interesting to read stories of people who learned their art from master Chinese acrobats and appeared on “America’s Got Talent,” than to look at pictures of guys in ball caps and beat- up Carharts pulling baling twine off a large round bale of hay in the Winter to feed some patient beef cattle that stand idly by. But it’s hard to shake the notion that somethings off in a country which pays a guy more to bring lawsuits than to grow food.


A Palliative Care physician on NPR the other day said that the State insurance system is in bad need of repair, as it financially incentivizes unnecessary medical procedures, and will allow her to write out a prescription for a $2000 medication (which it will pay for,) but not give that $2000 to the elderly patient to buy food, ridiculous, she says, because most of her patients are unable to afford dinner and need the cash more than the mammogram.


At the nursing home my Grandma is in, the days are filled with all kinds of activities- concerts, art projects, school childrens’ visits…but meanwhile the average resident is calling out desperately from their rooms for someone to help them go to the bathroom. I’ve met a lot of new people there simply because I happen to be passing and the staff (which I am assured numbers well beyond the state requirement) are unable to assist Clara or Jane with getting to the restroom. Water and the Loo. That’s what people are desperate for, on a day fill with scheduled life enriching activities.


I mention this because it’s about priorities. 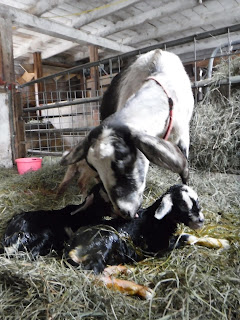 Nobody stays on a farm, when they are struggling to make even $30,000 profit from it, without taking serious stock of their priorities. The deceptive thing about most articles on farming is that they make us think either: “Poor guy.” Or “What an idiot! Get a real job!”. But every article on farming is written about all of us. We all eat. Agriculture is the serious business that concerns all of us. As small farms go the way of extinction, so does accountability and future farmers. It’s hard to inspire a new generation from a cell phone wearing noise canceling headphones inside the cockpit of a combine guided by a satellite GPS system, farming hundreds and hundreds of acres.


I propose food,water, and bowel movements be our nation’s top priorities. When we start making it as financially feasible for a man to provide for his family by growing food for the rest of us, as it is for a lawyer to make money bringing a Hollywood movie-star’s anti-defamation lawsuit, we’ll have something worth doing handstands about.


Sign up with a local farm. Vote with your food dollars: