Some time ago I heard my Una muttering something to the effect of: “she scrooged and scraped and scrooged some more….” And I mistakenly assumed she was using good old Ebenezer’s (of Christmas Carol fame) last name as a verb…Arrogantly, I chuckled over the nonsense world of children, then, and watched her busy about the work that is Child’s play. Only later did I realize, when reading Kenneth Grahame’s “Wind in the Willows”, that she was referencing a delightful verb he coined of the mole, when tiring of his 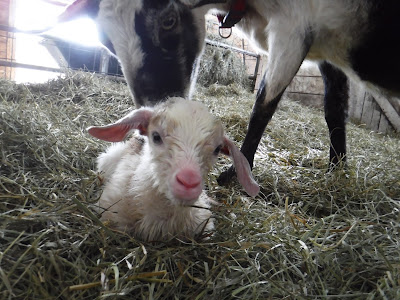 Scrooging is the perfect word for it. Anyone who has seen a child build a fort, or burrow through a snow tunnel, or corkscrew perfectly warm mud up with a stick knows that scrooging is the ideal verb to describe most of what children and moles do. It is exactly how to describe trying to get a weak newborn kid to latch on in the early hours of the morning, like trying to start a fire by rubbing sticks together, trying to get, by shear willpower, by hook or by crook, that divine spark to ignite, and nature to take over. Last night in the barn we all tromped out in the cold to check on the three does. We found Bluebelle, new mama to three, throwing her weight around in the goat shed, defending her little ones with more than necessary enthusiasm. It was a veritable hormone-palooza as Daisy was in active labor, and Lilly was ornery, in pre-labor, and protecting Daisy, her adult child. We played shuffle the goats, and brought Bluebelle back into the kidding pen, in case her ramming could cause the kids in utero in Daisy and Lilly harm. We’ve experienced stillborn kids before as a result, we think, of the rought re-shuffling of the pecking order when the Queen of the herd has been absent for 3 days in the kidding pen, and comes back to reassert her dominance.
Between Midnight and 5 am Daisy gave birth, and we woke early to rescue her little buckling. Too weak to stand, and lethargic, we followed our usual protocol, which is to give a quick half-syringe full of sugar water and reattempt nursing…and when all else fails, milk some colostrum out into the syringe, give him a belly full, blow dry him off with a hair dryer (heat is sometimes all the babies need to get the energy to show interest in nursing), and leave for an hour to let nature take over. In such times as these, it feels like one is scrooging and scraping, scrabbling and scrooging some more to coax life into full flower. Most often times the farmer is not needed in the kidding barn…but there are times when a steadying hand is called for, and it is always humbling and inspiring to be there to lend it. We usually never provide the motive power, just a guiding grip on the wheel to steady her as she goes. With Bluebelle’s triplets, they all came out so strong and healthy there was little need for aid, except, with all three to tend to, and the last one born in the caul, Bluebelle had her hoofs full, and we had to leap in and peel away the birth sac so the little one could breath. It was all done so quickly, in the blink of an eye, clearing the nasal passages while she licked and nibbled at the other two, and pulling him near to her nose, where her strong mothering instincts were fully in play; her tongue whipping up all the life force within her young, drying them off and readying them for their first take to their legs. 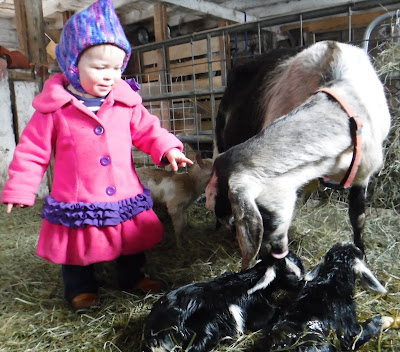 A.A. Milne said that of Wind in the Willows that a “young man gives it to the girl with whom he is in love, and if she does not like it, asks her to return his letters. The older man tries it on his nephew and alters his will accordingly….” It is the book we turn to for reading aloud in the Spring, because it is the perfect way to celebrate the new season, as Grahame writes so eloquently of it:

“It all seemed too good to be true. Hither and thither through the meadows (mole) rambled busily, along the hedgerows, across the copses, finding everywhere birds building, flowers budding, leaves thrusting- everything happy, and progressive, and occupied. And instead of having an uneasy conscience pricking him and whispering “Whitewash!” he somehow could only feel how jolly it was to be the only idle dog among all these busy citizens, After all, the best part of a holiday is perhaps not so much to be resting yourself, as to see all the other fellows busy working.” 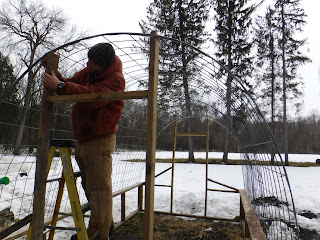 When the goats start kidding and the Sheep start lambing and the seedling start popping up soldierly in their rows in the cell trays under the neon lights, there is such a persuasive force to it all, that we can’t help but be shaken out of our winter doldrums and easy chair stupor. It’s good medicine after a long winter, and gets the blood moving just in time for the big transplanting days out in the field.
As I type, I am facing four shelves, laden with 48 flats of broccoli, lettuce, onion, leeks, swiss chard, kale, peppers, and herbs, all germinated, and just getting their true leaves. They bask before a south window beneath rows of humming shop lights. Most people don’t think of signing up for a veggie share until at least all the snow is gone….but we’ve already begun seeding by the middle of February, and other that the succesions of lettuces and other veggies, only have tomatoes and cucurbits to seed in April, when we begin the mass exodus of our veggie babies out to the greenhouse.

That audacious line: “the Kingdom of God is within”, a line so extravagant that only God could get away with it, comes to mind when you watch a seed germinate and live in a soil-less mixture. Many faiths espouse some kind of understanding of Divinity within, and not just without, and we have an annual reminder of it in these tiny seeds, which contain within themselves all the nourishment needed to sustain life in their baby-hood, until transplanting, and can be potted in mixes containing nothing but vermiculite, and peat.
As the snow melts, and the days lengthen, we feel like seeds ourselves, that have been buried in the house all Winter, sprouting recklessly, little by little, grateful for the excuse of birthing does to dash out to barn and back and out and back again, lending a hand to the birth of a new season, and finding ourselves coming back to life again as, covered in mud, and afterbirth, hands chapped and eyes wind bleary, we scrooge and scrabble and scrape…..and scrooge some more.