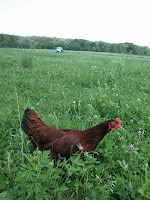 "Part of the secret in life is to eat what you like and let the food fight it out inside"
-Mark Twain
A new batch of broilers arrived today. I rescued one of them from the water trough....he had apparently decided to take a bath. He lay all scrawny and runtish on his back gasping and peeping pitifully. He looked, for all intents and purposes, as one destined for grave...but this being one of those days, I didn't feel up to the "stiff upper lip sometimes a farmer does what he has to" cull job. So I did what all self-respecting farmwives do. I put the poor little thing in a cozy box in the sun porch and waited to ask my husband to do the deed.

One hour later I heard gurgles of delight and raced to the sun porch to find my wee girl playing hide and seek with a fluffy puff of a chick who was merrily racing and peeping his blessed little heart out. It was, and I am not kidding you folks, 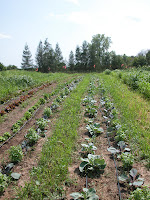 like witnessing the RESURRECTION. That chick was not the chick I had put in the box to die...and I cannot describe the strange sensation of seeing sudden and vivacious life where you had only expected to find illness and black death.
I found myself in a state of fumbling gratitude, wonder, and awe...I stumbled over the rushing of thoughts which ran something like
"what if I hadn't put that box in a sunny spot? What if I had dispatched that little thing? That tremendous victory had nothing to do with me! Why am I so overcome by the plight of one tiny little yellow bird? What is life? How does it....do?"

When I put that little chick back in with the others I felt the pride that a mother must feel when her child has bested the bullies against all odds. Not moments ago those other 99 cornish rock cross broiler chicks were pecking at that poor thing as if to hasten his untimely demise....and now, here he was strutting his stuff, back amongst them as one who had traveled, who had seen the world, and had been to the brink and back. Heck he had seen the sun porch!

Life on a farm is struggle. There are times when a farmer feels he's farming little more than death and woe. 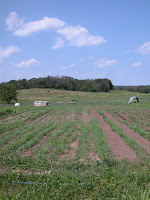 But there are always and ever those resurrections, having little to do with him, which buoy the soul and send him back out to battle the weeds, the worms, the weather...warm with the glowish delight and wonder of that which causes all things to live and breathe and have their being. 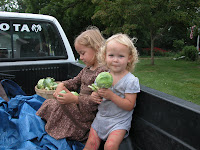