Since day 3 we’ve had moments like those of Day 2 and moments like those of the “breakthrough day”. But it’s been like a plane slowly taking off, gaining altitude. Each day we work with her seems to make her calmer in the stall, builds up more mutual trust. I think the trust part has been at the heart of this entire exercise. After all, we were total strangers to each other only a few months ago.

The unnerving thing about this gift horse of ours is how much she seems to pick up from us, whether we are aware of it or not. You can almost tell what kind of a mood her handler is in, from the way the horse is carrying herself, walking alongside whoever happens to be leading her out of the barn in the morning. 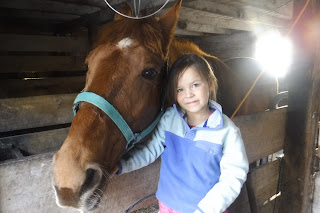 One day we came out for a training session after I had spent the night at my grandma’s deathbed. I was tired and grumbling; frustrated with the experience of several hours of painfully acute impotence and seeming futility. I had watched the features and body language of a woman I dearly loved for the better part of a day and a half, searching desperately for signs of communication as she slipped farther and farther from this world. When we reached the paddock Lady would not come to us or allow herself to be caught- at least not by us, while we were feuding.

“Maybe this isn’t going to work out. Do we really want to be putting all this time into this? Should we just give it up?”

All the pent- up feelings of waste and impotence at the nursing home welled up inside of me. I felt a ferocious need to control something, to make something happen. I grabbed her halter and drove her around the paddock alpha herd boss style. It wasn’t pretty, but it worked. What began as a work of bullish pigheaded “I’ll show you!” faith ended with a white flag of surrender. “I can’t do this today.” I handed Shane the rope and headed for the house vowing to sell the horse first chance I got.

That afternoon Shane had the best training session with her yet.

“I don’t think we should sell the horse.” Shane said later that night.

Since that day Shane has taken Lady out of the trial confines of her paddock and worked her out in the open field, going up and down the imagined rows of the future potato field and pumpkin patch. Each time he does this it’s like he’s writing a love note to the future, a pledge of good things to come, ground to be cultivated, crops to be harvested. He’s showing her how to fit in on this farm. They are building mutual trust. 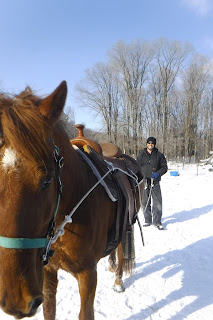 If we ever have days when Lady doesn’t seem interested in coming up to us and being caught, I slow everything down, mosey out to the middle of the paddock and take a beat. I look at the trees, the clouds, the steers, the fields- anything but her, until she shows an interest in me. Then I return some interest in kind. Eventually when I see her trying to stop circling me I walk away and around in a circle back to her and we both stop. Ready to begin. It takes 10 more minutes of my time. Well worth it.

We’ve learned that the days we want to throw in the towel with the horse are days when something else is going on- something which is bothering us and which we are telegraphing to the horse or allowing ourselves to be distracted by. It strikes me that these are the days when we most need the horse, and the work.

Ron said it well the day we met him and Lady:

“Doesn’t matter what’s going on with you-whatever troubles you’re having in your life. Get on a horse and the troubles go straight out of you, through the horse down into the ground.”

I suppose that makes them lightning rods. In that, horses are a lot like farms in general. So many moments working on a farm feel filled with futility and folly, for every bit you learn, or every year you gain in experience, you are humiliatingly aware of the dizzying mountains of knowledge that you lack and need. It’s easy at times to forget that that very thing is often what makes farming so rewarding. 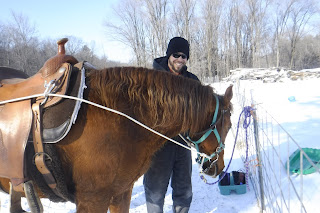 Sometimes it seems as if, like a horse, the farm also is a lightning rod for every lint scrap of trouble and toil, every twine ball knot of worry and struggle…but then too, working the farm, it all goes into the ground and mercifully you find you are the better for it.