Wasn’t it Mary Poppins who said, “well begun is half done”? Or was she quoting Aristotle? That promising little tidbit was flickering about in my mind as we strode out to the paddock for round two. Unfortunately, our second attempt at ground driving was to be anything BUT practically perfect in every way.

It began well. No issues saddling or bridling. But it soon became evident that she was waiting to throw a fit. It was as if that horse had spent the night thinking the whole thing over and was anticipating how to get around having to obey those long lines. 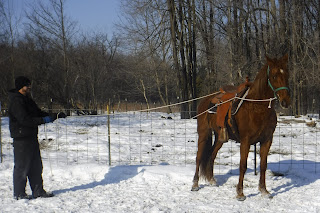 First, she demonstrated no intention of stopping on command. She pranced every stop, she sidestepped in pretty little dressage motions instead of walking up. She give dainty little half bucks and rears. Eventually she turned and faced Shane. When I watched her I had a vague memory of Lynn Miller writing in his “Training Horses Training Teamsters book, that when a horse turned around on you like that it was either your fault for hooking something up wrong or time to get a different horse. I was beginning to think the latter- but then I noticed our rigging the lines through her stirrups was pulling her head lower than it looked like she was 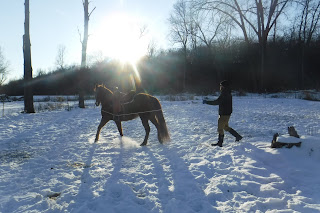 comfortable with, creating another layer of pressure that was unnecessary. We ended the session on as good a note as possible- a couple laps around the paddock and a “sort of” stop near the fence, and called it a day. We were off to the hardware store for some snaps to rig up some “loops” for the lines to run through higher up on the saddle.

The next afternoon when we got to the paddock Lady Nugget Muffin was all lathered up snorting and restless. There was a big dent in the fence, a T-post bent. It looked like she had been racing laps around her paddock and had slipped into the fence and then shot off for some more, locked in a nervous frenzy of fear. “Easy girl, easy. What is it? What happened to you?” We rubbed her down, brushed her. Scratched her withers and looked back along the tracks. A man and his exuberant dog out for a hike were making a deft retreat.

She would not stand still for saddling, swinging her 1000 pounds from side to side. I had my very hat knocked off my head as I attempted to tighten the girth. I looked across at Shane. It seemed like one of those days for giving her a friendly pat and retreating to the house to bake cookies and live to see another dawn. 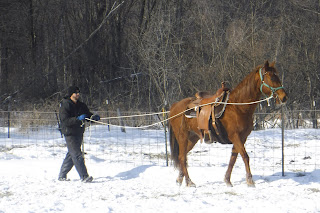 But Shane looked eager. “Maybe he knows something I don’t” I thought, as I retrieved my hat and handed him the lines. “This, I gotta see.”

I could hear Mario Lanza singing “Ah sweet mystery of life!” in my head as I watched what happened next.

Lady seemed grateful for something to focus on, as if the work itself were calming her down, giving her an avenue out of the deadlock of nervous energy. Every time she showed signs of sidestepping or turning around, Shane would rein her out of it in the other direction coupling the change of direction with a kiss and a “walk up”. Time and again he showed her the appropriate response was giving her “a way out” of whatever was bothering her. The snaps higher up on the saddle were working for us better than the stirrups had, and man and horse were looking comfortable with each other. Soon she was lowering her head and relaxing into that calm partnership that makes for a day’s work well done and well won. 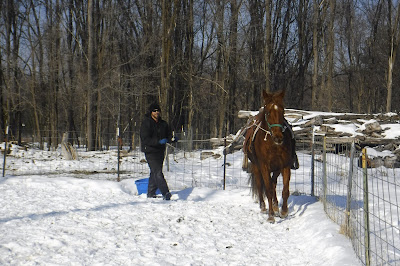 The day was a lesson is how even when you  don’t have the perfect set-up, the perfect situation, the perfect horse- or perfect know-how, you still may find yourself with the perfect opportunity for a breakthrough.
Posted by Mr.and Mrs. Farmer at 9:06 AM