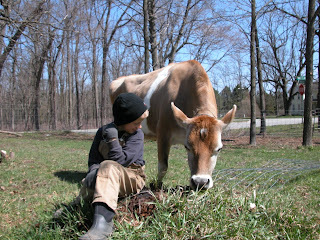 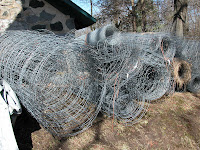 Moving an entire farm in February has its disadvantages. Having to leave 3 acres of fencing frozen solid in the ground chief among them. Greeting your new neighborhood with 7 pregnant sheep, 2 rams, a flock of laying hens, 15 guinea hens, and two dairy goats with no accompanying perimeter fence lies somewhere between Errol Flynn bravado/optimism and Daffy Duck lunacy. Thanks to Spring thaw, the fencing has been retrieved and
We are progressing with our attempt at show-stopping grass farming. 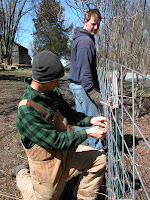 Not so long ago I had no idea what hay was made of. 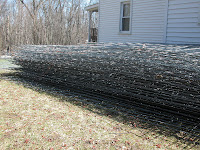 I could not conceive of asking any farmer to answer the question for me either.

Ignorant as I was of this "wonder crop" I understood somehow that the answer was so obvious that to ask would be pretty much as embarrassing as losing my drawers on the side of the interstate.
When I realized that hay was, um, grass...the world began to look very different to me.
Everywhere I looked I saw meat, milk, and cheese. Medians were food, yards were food, huge expanses of landscaping surrounding churches: food. Suddenly the very idea of a lawnmower seemed insane to me. Why not sheep? rabbits? goats? a cow? Even geese and chickens eat grass for a good portion of their diet...

"Statistics claim that there are thirty million acres of lawns in the United States, not counting the miles and miles of roadsides that the highway department mows and the miles of county roadsides that rural lawn fanatics keep as trim as newly shorn ewes. By mowing lawns, says research from the University of Sweden, we burn up eight hundred million gallons of fuel. That's over $1.2 billion dollars at today's prices. For this our soldiers die in Iraq.
If homeowners added white clover to their lawns, which some do, I presume well-fertilized, herbicided, watered, and otherwise coddled grass would produce about eight tons of dry forage per acre per year, because that's what good farmland can do. That would man that some 240 million tons of what could be good hay are not being produced. Multiplication yields some stunning milk or meat production figures. And remember that "hay" in the form of grass clippings is now going to landfills or composting facilities at colossal expense."

Gene Logsdon "All Flesh is Grass" 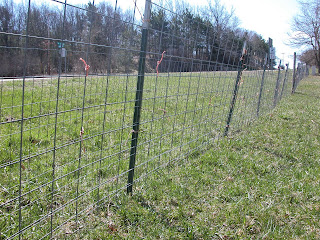 The most unexpectedly beautiful thing about grass farming is the usual accompanying existence of a decent fence. Good grass farming involves livestock...and livestock involves fencing. I say beautiful because a fence marks a speck of land out as something special, reserved, sacred...I also say it because of the magic that occurs when a fence is up. 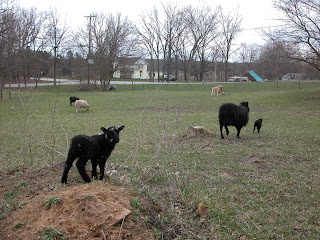 Neighbors you haven't met yet stop by...

"Hi there! I've been meaning to stop by for weeks now..."

there's a nice good lean on the fence by both parties on either side..
"I see you have some laying hens...what kind are they?"

"Are you the folks doing the farm shares?"
"I grew up on a dairy farm...."
and then there's an appreciative gaze over the ewes and their new lambs...

Far from proclaiming to all the world to stay off this property, a fence tells neighbors just how far they can mosey on up, while still remaining on their own terms...a fence is something to lean on, to chat by, to peer through. Cattle panel after cattle panel surrounds our grand experiment in the cultivation of the most ubiquitous perennial, and cornerstone of our entire farm: good grass.
"Nothing builds soil like perennials. Nothing destroys soil like tillage." Joel Salatin

More than this...there is an investment here that goes beyond good returns in beef, lamb, pork, and poultry. It goes even beyond the investment in good top soil, and natural pollinators. It is an investment in beauty. Yes indeed folks, Soul Food. The corner of County Line Rd. and MacClain is now dotted with sheep, goats, and a jersey cow. It is rushing headlong into a bucolic cliche complete with blossoming clover, busy bees, and fat Spring lambs. 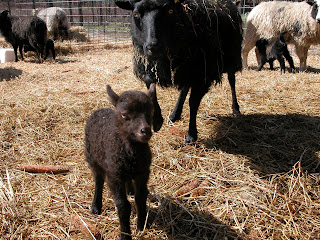 Its a corner of the world devoted to the promotion of slowing down...feasting the eyes...a place where practicality meets whimsy in a kind of agricultural visual poem.
"We must view ourselves as earth stewards, not cattle farmers, grain farmers or vegetable producers." Joel Salatin 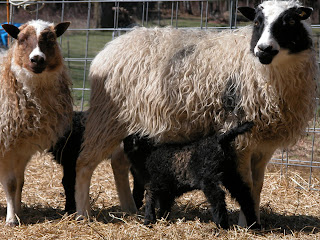 As Midwesterners we are often uncomfortable with actions that are not pragmatic. We often meet romantic notions and ideals with a kind of "meat and potatoes" skepticism....Yet we are inconsistent when we do not view our lawns as food!

Reconciling our secret Charlotte Bronte-esque longings for Romance and the idyllic English countryside with our Midwestern eye to the bottom line is possible with a good fence, good grass, and livestock. 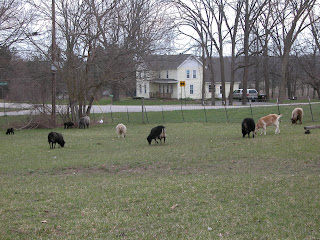 "The earth's grasslands, building literally feet of soil over many centuries, need to work their wonder on your farm and mine. Putting grass on a pedestal, and in fact using it as a focal point of our agricultural enterprise, can help ensure long-term productivity, profitability, and distinctiveness."
Joel Salatin
Posted by Mr.and Mrs. Farmer at 1:38 PM