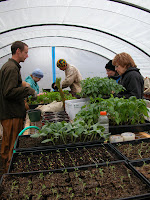 Early April is when you do a lot of scrutinizing of those buds on those trees...and peering down at the dirt...and visiting the greenhouse. In a greenhouse it's always Spring-even if Mother Nature dumped a little last hurrah snowfall on you just when you were planning on planting out your brassicas. The greenhouse is where you go for hope therapy. 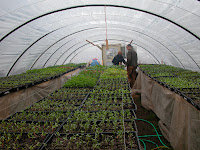 We spent the day potting up some lovely heirloom peppers...stalling them hopefully until May when we can get them in the ground. The last round of tomatoes for our CSA gets seeded today...it's going to be a delicious summer. 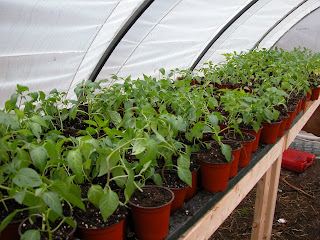 "In the spring I have counted one hundred and thirty-six different kinds of weather inside of four and twenty hours." Mark Twain
Special thanks to our volunteers! The best thing about Community Supported Agriculture is that there is always something for everybody to do. And it usually involves dirt. So old and new friends stop by, and sooner or later
everyone is up to their elbows in dirt having a jolly good time chattering away and getting loads of work done without marking it. Our CSA veggie garden will be one gigantic patchwork quilt with the words "Many hands make light work!" stitched out in cabbages, carrots, and tomatoes.
"April prepares her green traffic light and the world thinks Go"
-Christopher Morley 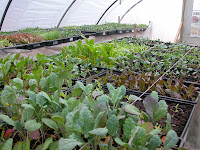 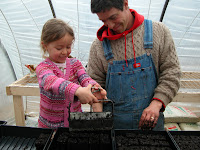 Happy April! CSA Farm Shares still available. Email for application and info! littleflowerfarmcsa@gmail.com
"Spring is when you feel like whistling even with a shoe full of slush" Doug Larson
Posted by Mr.and Mrs. Farmer at 11:59 AM