4 days ago I took what I thought would be the last photograph of our Jersey cow, Honey.
It's posted below under "How to Give up on A Farm". 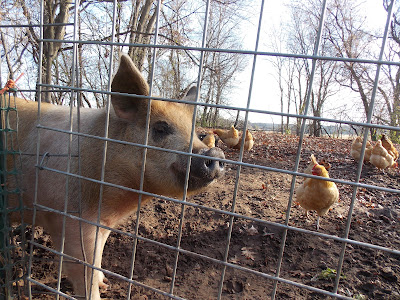 The day before she was to be sold a neighboring farmer came up the driveway with some corn stalk bales for bedding for our dairy animals...
I remember looking out the window at his act of generosity and thinking:
Seems like everyone else is fighting harder for this farm's future than I am.
The thought was a jolt, and electric charge inspiring me...but the facts of our life at the moment, and the crunch of things were ready to jerk me back from full digestion of that inspiration...
When a farmer with livestock fails to bring in a hay crop, the coming of Winter feels something like a death knell. With barn full of hay  the snow fall becomes a blanket, covering over work well done, and peaceful security...but the Winter weather stealing over the landcape, filling the sky, the chill in the air, the drop in temperature, the loss of daylight...all of it, over an empty barn and empty pocket book brings a stiffness to the bones, a tightness in the chest...You start to mentally delete animals in your mind's eye. You feel like your milking someone elses's animal. You shrink from the farm that has sustained you all year, emotionally and physically, afraid to give it anything more of your heart...breaking under the ridiculous strain of not quite enough cash.
Jerry deposited the corn stalk bales near the coop and his machine came to rest on the hill. 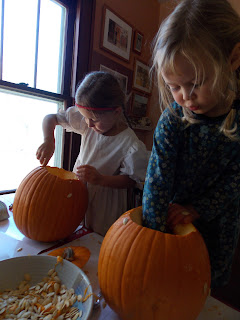 He looked out over the goats and Honey and her calf. "I didn't know she had a heifer!" He grinned admiringly. I broke forth with a guilty tale of woe and told him how we were going to sell her the next morning. Nothing feels quite so wrong as telling an "oldtimer" that your going to sell the cornerstone of your farm: the milk cow.
The story of how we came to sell Honey was simple enough. In a time of lots of liquidaton, and Fall butchering, Shane had sat on the edge of the girls' bed and said: "We are not going to sell Lemon. We'll keep her over the winter, and breed her for piglets." Lemon was from the beginning, on account of her unique color, the favored hog on the farm....and given the skyrocketing price of feeder pigs, the idea seemed an ideal investment. We'd get 8-10 piglets out her, and have feeders to sell in the Spring, and the girls would be allowed consumation of at least one cute animal attachment.
It proved , eventually, to be an Aggememnon promise, or at least seemed to be. Things got too tight, and when it came time to butcher the other three hogs and three more lambs besides, the price of Lemon was needed to pay the butchering costs. Money is always such a bother on the farm. The farm produces plenty of things: grain, poultry, meat, milk, eggs, cheese....but money has yet to grow on trees or bushes or stalks....and the butcher would, all things considered, rather be paid with a check, than with chicken. We sold Lemon, cringing at the broken promise....and our 4 year olds inability to believe we could break a promise, and must not be explaining things right when we tried. Her absolute faith was both heart rending and inspiring. A gift almost too heavey to bear.
All this over a consarned pig!
The day the butcher arrived, we had no trouble loading all three of the other hogs into the trailer. But suddenly he slammed the door shut, as some of his other "customers" were trying to make a break for it. 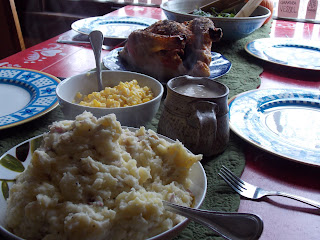 I had one of those God given pauses, looking at Lemon, left standing alone in the pen, and very distinctly understood that I would not be much of a wife if I didn't find some way to help my husband keep his promise to our girls. So, watching the dollar signs crumble and slip through my fingers, I heard my voice say: "We're keeping this one." The butcher could here the weak knees and flummox in my voice "Really?" he asked "Well, that makes it easier for me...they're about to bust out of here!"
Cussing softly I released the bewildered Lemon with a shake of the head and an affectionate pat on the rump. I told myself "This is where emotion gets you" as I walked up to the house...knowing all the time, that it wasn't emotion that saved that hog from the slaughter.
I figured I had just one last asset large enough to make up the refund dollars for the two folks who had bought Lemon....my Cow and calf. 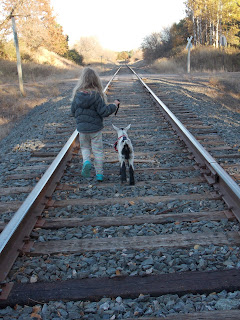 Everybody seems to know without thinking about it, that a cow is a cornerstone for a farm. A farm with a cow can feed a family, their hogs, their cats, their orphan goat....a cow's schedule requires something from the farmer that will mean the sucess eventually of a young farm: absolute loyalty and persevearance. You cannot skip a milking time. You must muck out her stall. You must take the time to train her...because she's a lot bigger than you!
But those moments, leaning into her flank....are moments that wed you to the whole shebang.
They are the farmer's time for contemplation...and even in the worst of times, prove therapeutic at the very least. 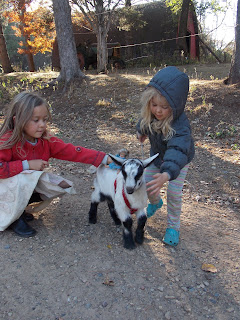 When I told this tale to the farmer with the corn bales I was mindful that he knew what a shame it was to be losing an animal we had tamed from cow number 364 to "Honey" queen or the Little Flower Farm Dairy herd. My mind began to plunge down into the different ways I could have been more mindful of our newly seeded hay pasture, wondering where I had gone wrong to have arrived at such an impass.
He broke in on these thoughts with "Well, how much is she worth to you?"
I didn't understand the question.
"What are you selling her for?"
When we told him he asked if a thousand dollars would do us."I had a good year" he said "My wife and I don't need it."
I looked at the man. And promptly burst into the most shameful torrent to tears you ever did see. 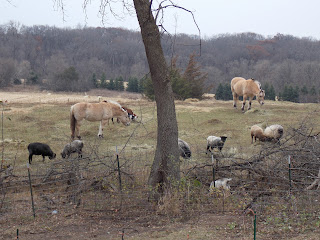 They were words I needed to hear, and certainly never expected to. Not from a near stranger.
" I learned a very important lesson in my life many years ago" he said, when he returned later with money for Honey's redemption, "I was combining for Mauritz (the man who built your farm) years ago in that very field there, and a neighbor kid came up and asked for some work to do. He was a scrawny nothing of a kid. And I kept wondering what kind of work I could possibly have for a kid like him. So I told him I'd think about it. I got back in the combine and was going over the field and thinking what I could have him do...and I realized there was a heck of a lot of rock in that field. I could use someone to pick rock. So I went over to his house and knocked on the door. And you know what? That scrawny kid turned out to be one of the hardest working people I have ever seen in my life. I learned from him, and I'll never forget it, that everybody deserves a chance. People need help. We got to help eachother."

When I thanked him he said: 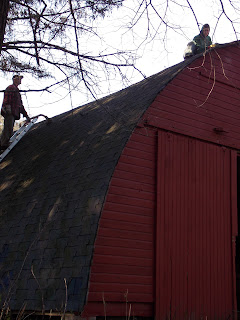 "You'll sleep well tonight. Nothing worse than thinking about selling a good animal. You don't sleep well on it." And then he was gone. 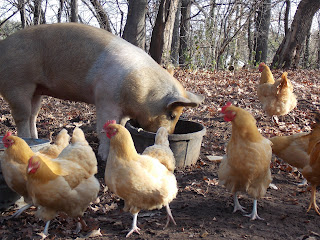 The next day I told him that milking that morning was different. "I was milking my cow", I said, "and somehow if felt entirely different and peaceful."
"I thought it would be" was all he said, "I thought of you this morning."

This was all from a man of very few words...I certainly don't have enought to tell this tale to its entirety. Suffice to say there's a cow in our barn, and on our weather vane. There's history in our fields, and absolute MARVEL in our hearts.

Sometimes it feels as if everybody else is fighting harder for our farm than we are. Sometimes that's a beautiful thing.
Posted by Mr.and Mrs. Farmer at 11:09 AM