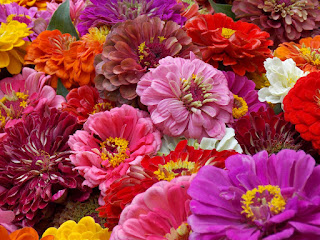 Our corn is not as tall as our neighbor’s corn.
Our neighbor’s corn stands 9 feet tall and it hasn’t even tasseled
yet. Walking into it is like that scene from “field of dreams” where the ghostly
baseball players disappear into a stand of corn on the edge of the baseball
diamond. Corn is, after all, a tropical grass. Amidst such lush foliage,
standing in between rows of giant stalks gripping the ground with toe-like
roots, it is easy to 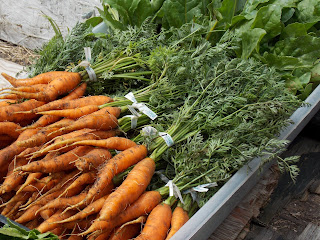 hide away from all the world.
But when I say “neighbor” and I say “corn” I suppose I may 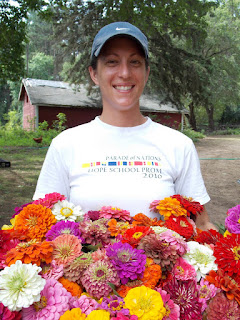 be equivocating. Our farmer “neighbor” lives miles away, rents this field among
several others, and merely calls up the guys who spray and plant and harvest to
tell them WHEN. He doesn’t have to deal with clouds of his chemicals drifting
onto his pastures, vegetable fields, or into his yard. He doesn’t have to farm
with an eye to local community watersheds, or a yearly increase of organic
matter incorporated into the soil for better tilth. He’s very much removed from
the hundreds of acres of dirt he plants to corn or soybeans each year. His
corn, beautiful as it looks to the unsuspecting eye, is a genetically modified
crop, scientifically engin 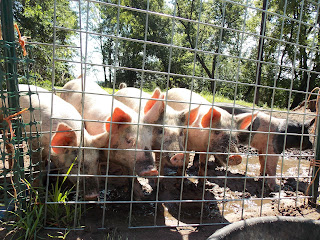 eered to be resistant to the round-up he sprays every
year to keep the weeds down. Never-mind that weeds eventually do adapt, and
become harder each season to eradicate, for the time being his field is pretty
clean…and by that we mean, free of weeds with only corn growing in it. And that’s
a dirty secret.
The secret of those hundreds of acres of corn is a kind of
wholesale soil prostitution. This land was once farmed by three brothers with
horse drawn walking plow and hutzpah. Every year, manure was splayed out onto
it to increase fertility and promote good soil structure. It boasts a rich and
storied pas 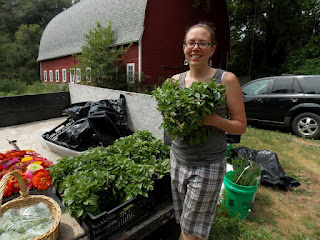 t of men and women who worked with an ever fixed eye on the future
generations that would raise their families on the back of it…and now our
absent farmer neighbor treats this dirt as if it’s simply a place holder, a
medium to fill in the holes between the roots…every year the fertility for his
soy beans or his corn comes from a tank on a flatbed truck. Nitrogen.
Potassiam. Phosphorous. Benign words, but dumped onto the land yearly for the
purposes of the year’s crop, and with nary a thought to the soil results in
degraded and denuded dirt, prone to erosion and blowing away.
Every once in a while, in this farming gig, you run smack
into your ideals. Meet them face to face. Sometimes to rekindle an admiration
and longing for them, sometimes to furrow a brow in frustration over them. Trying to talk our absentee farmer-neighbor 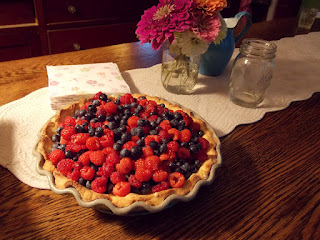 into not spraying his crop, or into planting it all to grass instead, as it is
one of many fields he is growing corn and soybeans in, results in one such face
to face confrontation with our ideals. Last spring, when he had hired men to
spray round-up on the hundreds of acres of corn that surrounded our 7 acre CSA
veggie field and newly planted hay-land the day dawned for the task with winds from
the South East at around 15 miles per hour. When chemical drift was noted and
mentioned, he replied with “aw, that stuff’s just sugar, you know.” Which made me wonder about the level of
understanding he had about the chemicals he uses to farm, or whether he
seriously thought we’d be similarly uninterested in the toxin’s use near our
food and our animals’ food. 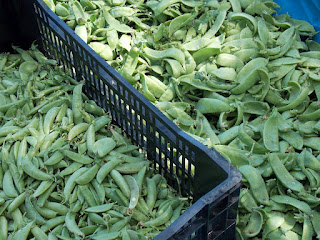 We walked away with what every skeptic knows running through
our heads: you can’t live out your ideals in a vacuum. There is something about ideals that begs to
be lived together in community with, well, just about everybody else. Like the
cottony catching quality about love, that we all experience at a wedding
between two people crazy about each other. I think that something is truth. To
say that there is a right way to do something is unpopular just at this moment
in our human history, but once upon a time believing in truth, and that it
could be known was not only common, it was laudable. There are a million ways
to farm well….but it isn’t going too far to say there are some ways of farming
badly. Poisoning pl 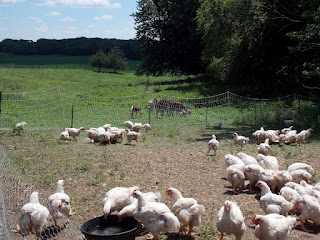 ants and wildlife, contaminating watersheds, and ignoring
soil tilth. I’d be willing to go farther than saying it’s farming badly. I’d
say it’s not farming at all.
Farming consists in some kind of connection with the soil.
For some that’s spiritual. For other’s it simply means they plan for it,
provide for it, and work with a view to its benefit, in a patient give and take
relationship that is laced with a “for its own sake and for those that come
after me” attitude. Farming consists in being present to the land that gives
back to you, for better or for worse. A kind of “you’ll find me in the field”
mentality that weds itself to the reality of taking good care of a piece of
dirt, milking the animals that graze on it, and planting and watering the seed
that is planted on 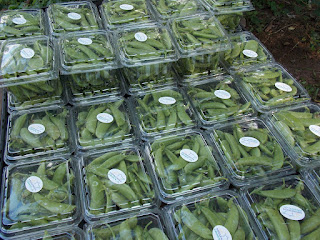 it. I’ve said it before, and I’ll say it again: The farming
farms you.
My own version of it entails twilight opera sung at the top
of my lungs to scare away the deer from my 400 foot row of sugar snap
peas. We swallow the calumniations of “crazy”
or “naïve”…appellations that sometimes come at a time when a truck broke down,
or an energizer busted, forcing us to dramatic measures of toting pigs in the
back of our Buick Century, or running the rows like some wild aborigine yelping
and singing siren songs in the dark….Every day we wrestle with our ideals.
Weigh them against the hard realities of life with two small children. Conscious
of the fact 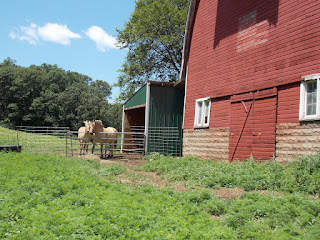 that while farming is not a religion, neither is it a mere
occupation. It is should not trump our children or each-other, try as it might
vying for every last inch of our effort and attention…what is farming? It’s a
field of dreams. Against the backdrop of the farm e verything you’ve been, are,and will be materializes and floats in front of you. It’s staying put, putting
up, and riding the roller coaster ride of the four seasons. Flinging you to the
skies even as it wrestles you to the ground…If you build it they will come, the
garden toads, and butterflies, the lady bugs and and bees…and others too…that is the hope, others willing to build it with you.
Posted by Mr.and Mrs. Farmer at 3:31 PM