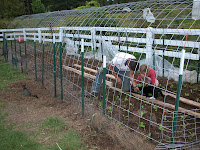 In what may have been our Waterloo, we transplanted some asian greens to a newly constructed hoophouse in the hopes that they would sprint to the finish and smile up at members in their last boxes.


We have been composting chicken and rabbit manure in these beds for a year now, and the resulting soil is pure fertile sponge. An Organic grower's dream bed.
Yet it cannot be denied that this sudden transplanting push felt somewhat...untimely. After the exhileration any gardener feels at seeing tilled soil, ready and waiting for seed and growing green things...we hit a wall of fatigue that signaled the nearing end of the growing season, the change in weather...and the end of mass plantings.
And then, Sunday, in what can only be compared to tragic soap opera drama, the chickens breached our temporary fencing, and began to play "scratch and sniff" in our newly planted beds.
One of the difficulties in veggie farming is the emotional toll that sweet little tranplants can take on the human heart. One feels an almost motherly attraction toward them...and all the anxieties and smiles and tears that can pour from a parent's heart towards his or her little ones, can also be wrenched from the farmer's towards these green growing things. By Fall, the veggie farmer MUST stop the transplantings...it is too much twanging on the heart strings!
(Or so our thoughts ran as we stood stupefied, gazing at our poor little ripped up transplants, gasping and groaning for soil and water.)

Not so nice thoughts about chickens also ran through our heads....perhaps it is the coming of Fall and the impending Winter...but I have been imagining quite a lot of slowly rotating spits lately....
But as Nature so often and so gently and so slyly does, She won us over again with the discovery of a mother hen and her newly hatched chicks out in the field. 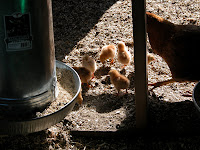 She had gone off and raised a fine little troop all by herself without our knowledge....and you should see how tall she stands when she is leading her little ones around, or protecting them from passers by....she scratches around in the dirt for them, and teaches them to poke their little beaks around for breakfast.....imagine! No heat lamps or chick starter ration! Just good Old (wise) Mother Nature at her best! We are continually awed and inspired by the things that happen on this farm...that we have nothing to do with! 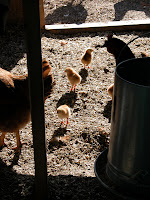 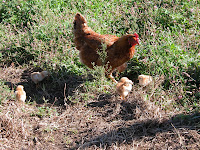 Beatrice had another litter of kittens.

When we first moved here, the yard was a maze of mole hills. Outdoor cats with claws have definately cleared up that problem!
Beatrice brings her little ones freshly caught moles and voles and mice several times a day...preparing them for careers as world class mousers! 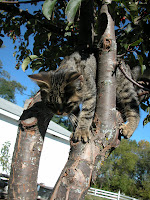 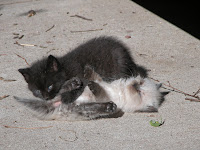 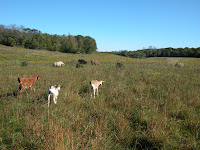 The pastures are showing fantastic signs of recovery due to just one season of grazing. It is amazing how livestock can even the playing field and cut out the competition for some of the lusher grasses. 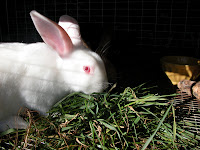 The rabbits are all sold, and destined for stews, pies, and bistro dishes. 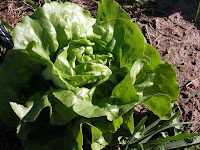 The last of the lettuces will go out in this week's CSA deliveries. I will miss those butterheads. We will experiment with some Season extension this Fall...
Plans to put in a perennial flower border to the west of the Vegetable field are in the making. We need more pollinators! 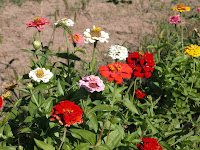 Last of the Zinnias 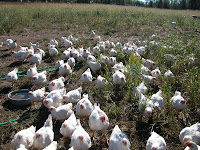 broilers will be ready in a week or so. They have generously fertilized a nice chunk of next year's veggie acreage.
Integrated animal systems on CSA farms are simply dreams come true for both farmer and animal. Thank you to all of our members who have supported these projects during our 2010 season.
Posted by Mr.and Mrs. Farmer at 1:23 PM