Bouquets this Weekend at the FarmStand $5 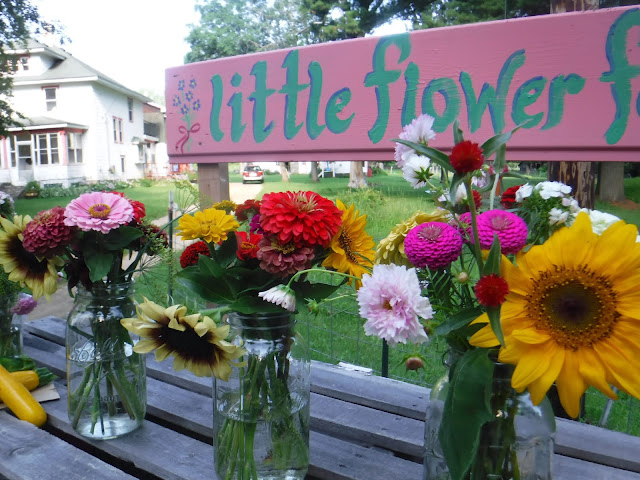 Because with all the zoom, masks, social media, news, and isolation, you might be feeling just a bit squeezed and pinched and drained.
But Flowers (and Luciano Pavarotti) make you feel human again and remember that you are capable of JOY and BEAUTY and HAPPINESS.
Also on the Stand this Weekend:
ALL ORGANIC potatoes
savoy cabbage
red cabbage
cucumbers
zucchini
parsley
and call ahead to order KALE and SWISS CHARD 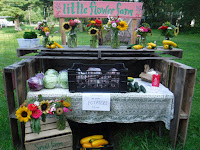 The Little Flower Farm stand is open on Fridays and Saturdays.....
(Take a left at Crabtree's up on Quinnell Ave.)

BUT you can special order your veggies for CURBSIDE pick up throughout the week at the farm!

Call to order and we'll harvest it fresh for you in a jiffy! 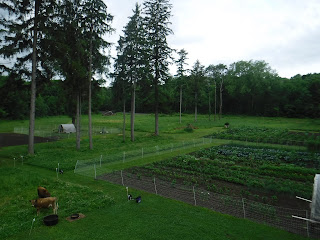 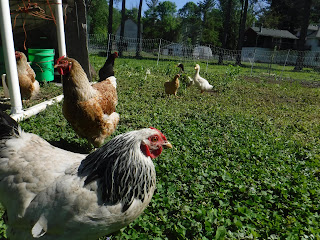 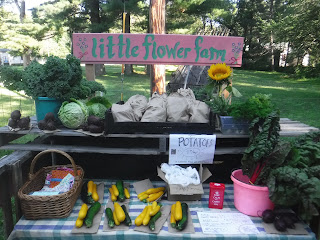 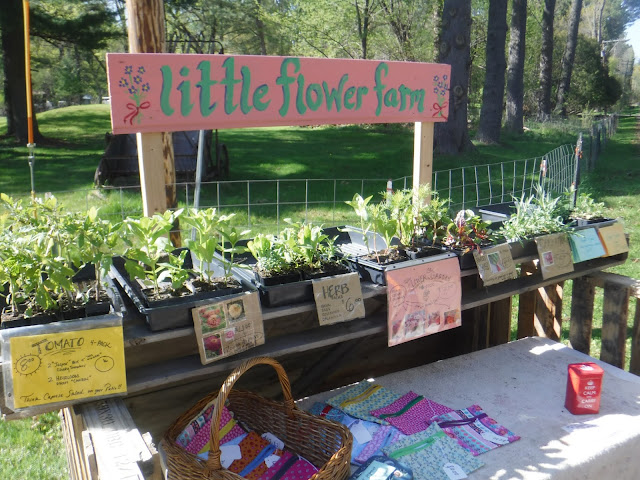 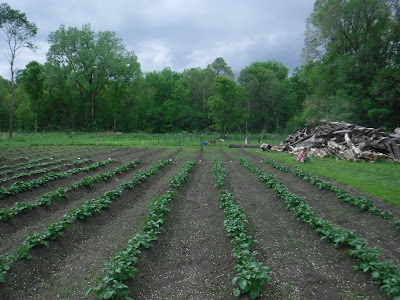 Get Small or Get Out


I met Josh at Grundhofer’s Old-fashion meats in Hugo. Just as the word “farm” will often conjure up a cliché’ for people- white picket fence with a rooster on it and a red barn- so too the word “butcher” will conjure up an image of, well, Josh.

A big man with a husky voice, he looked like he could easily make short work of a side of beef. He had a heart to match. With his usual laissez faire approach to grammar, he took a genuine interest in our small farm.

“You must’ve grained them lambs you brought in. Marbled all through. Not like them other suckers last year.”

At the time, we were living in the driftless region,in Southwest WI. The sheep had clearly benefited from the incredible pasture there. In the fall, we trucked half of the feeder lambs back to the Minnesota side where Josh was able to do on-farm slaughter and custom butchering for us at a friend’s farm for our grass-fed lamb fans in the valley.

I had thought the occupation of butchering would have made him insensitive to animals in general-but he had a genuine affection for goats. He had dreams of starting up a small abattoir of his own and raising his family on a hobby farm.

In the end, the rules and regulations of the USDA made it too expensive for him to attempt. Here he was. He had the skill, the will, and some capital pooled with a friend- with the guarantee of plenty of business. We weren’t the only small farmers around looking for a place to send our hogs, lambs, and bucks to. But he was looking at a start-up cost upwards of $60,000 for a small meat processing plant up to code.

A vertically integrated food system in which we rely on large processing plants for our brats, boneless skinless chicken breasts, and steaks for the grill, may seem like an efficient way to get lots of cheap food to many people fast, but all it takes is a crisis like the one we are currently in with Covid-19 to reveal how fragile and vulnerable such a system is.

Very quickly in a crisis, the same system that supplies so much for so many can deprive so many as well.

As the sign from the meat supplier on the Marine General Store’s freezer says:

We are not experiencing a meat shortage, but a delay in the processing of the meat available.

I understand the concern for food safety, but as a small farmer I also know there are few better guarantees of quality than small scale production. All our major e coli contaminations of recent years were traced back to mega farms.

As backyard producers of livestock, we need more small abattoirs and laws which encourage rather than stifle them. People are starting to think outside the box. Reports of hog farms in Southern MN having to euthanize hundreds of animals because the plant they send them to daily is temporarily closed reveal a problem with our current model of food production. It was striking how, when the larger grocery stores were running out of meat, Swanks, the local butcher in St. Croix Falls, still had plenty.

Critics say it’ll never happen. Farms like ours- throwbacks to the 1940s golden age of mixed livestock and diversified crop farming are all but extinct. “You can’t turn back the clock” they say.

But if there’s one thing this Corona Virus has already taught us, it is that the world as we know it can change shockingly quickly. We may well reach a point one of these days where we’ll have no choice but to consider some simpler ways of putting meat on the table. 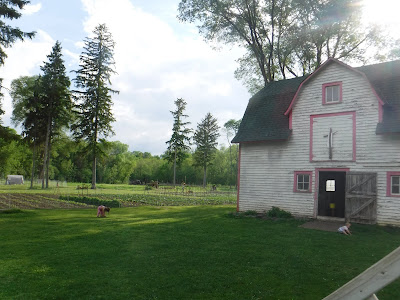 
Life during the Covid-19 pandemic has been like living in a science fiction novel. Walking into the grocery store this past Saturday, and seeing more people with face masks than without, greeting the clerk from behind plexi glass, and coming home (once again) with no toilet paper, it was hard to avoid thoughts of the apocalypse, and a not to distant future filled with robot employees and virtual workplaces, a society with very little personal interaction. 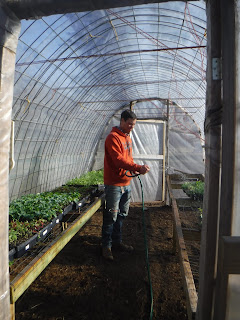 Some people have met the crisis binge watching their favorite BBC melodramas. Some have carted off cases of Guiness from the liquor store. One guy in the St. Croix river valley who shall remain nameless filled his grocery cart with the entire Cub Foods stock of Yoplait yogurt cups.


Our family has geared up for the future by reinvesting in the old- fashioned ways of living.

After another 40 minute commute to Cost-co in the midst of all this madness, only to find their meat section had disappeared, my husband and I bought a Jersey cow.


“A what?” the grocery clerk asked me, face blank, and fingers paused mid-air over the keypad.


Once she realized I was not talking about some product called “Jersey Cow” which was the go-to item of the Corona Virus season, but a living breathing bovine- the kind we all remember from our kindergarten picture books, she chuckled.


Which is exactly what we were thinking, looking at our 6 acre farm. A good portion of it went to burdock last season. I have since learned that all parts of the Burdock plant are medicinal. So I’ve made some peace with the stuff. But after days of pulling it out of our pasture and pausing only to disentangle burrs from our hair, boots, jackets, gloves, eyebrows, and one year old baby, we were ready to consider ruminants. 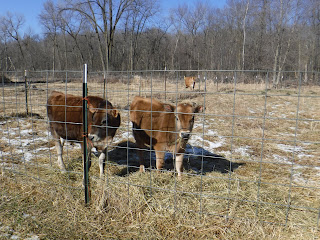 Two steers to make meat for us and our neighbors (and save us runs to Cost-co.), and a cow to give us milk, butter, cheese, whipping cream, ice cream, and a calf to boot. That sounded like a pro-active way to respond to “Shelter in Place”. While we reaped all those delicious rewards, they would be fertilizing our fields and keeping the burdock at bay.


Buttercup arrived the week after my three dairy goats kidded. Each morning I would milk the goats, while my husband sat around the kitchen table with our 3 year old and resident baby, and then we’d switch so he could milk the cow. By the 4th day after her arrival I was awash in milk. Milk filling my fridge in half-gallon jars. Milk cooling in the freezer, milk down my pants and into my boots when one of my goats got saucy and kicked the bucket. I was dreaming about milk even. One night’s dreamscape finale included swimming around with Esther Williams in a giant milking pail beneath a suspended wheel of cheddar.


Anxiety was heightened because I was waiting for a shipment of freeze-dried cultures to inoculate my milk with, and start using my milk for cheese. Until it arrived I felt my hands were tied. On the plus side, the hens were laying more, as I poured surplus into their scrap bucket. The barn cats were sleek and lazy, their bellies filled with the high butterfat Jersey milk.


Eventually, with the help of a man named David Asher I was rescued by the very thing that was overwhelming me: the milk itself! 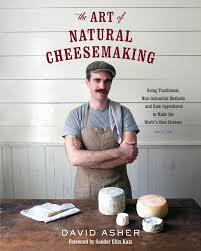 David Asher is a goat and veggie farmer like myself, and always thought it was strange there wasn’t more buzz surrounding natural cheesemaking- using bacterial cultures you start with your own milk on your counter- top. After all, the sourdough bread revolution has caught on, and the principles are the same. Milk was made to ferment. All the bacteria necessary for cheesemaking can by sourced from its milk! It was Asher’s book “The Art of Natural Cheesemaking” and his “Black Sheep School of Cheesemaking” that inspired me to get started with Jersey milk cheese without the use of boughten freeze-dried starter cultures. I clabbered a quart of milk in a jar on the counter, marveling at how long it took for my raw milk to congeal. It still smelled sweet after 2 days out on the counter. When it became a yogurt like mass I hung it from a bungie cord in a loose-weave cotton cloth and let it’s whey drip for 3 days. I opened it up and worked some kosher salt into it with a spoon before hanging it again for an additional half of a day. The result? A lovely cream-cheese like addition to our family breakfast, lunch, and dinner table. That cheese, so simple, is a” gateway cheese”. It can be enjoyed fresh, or aged to become a blue cheese or a white rinded cheese, depending on it’s treatment during the aging process.

One remarkable thing about the Covid-19 pandemic is that it has found us all sympathetically suffering many of the same things around the whole world. Less socialization, more isolation, a change to our normal routines…we are united with so many around the whole world in these new privations.


But for me, I found that the positive activity of making cheese like this has also given me a feeling of solidarity with much of the world that I didn’t have before. It’s easy to forget that not everyone in the world can just haul off and got to the store for cream cheese or crème fraiche if their recipes  (or tastebuds) call for it! Straining yogurt like cheeses through cloth is how most of the cheese in the world is made and has been made for centuries.


“Shelter-in-Place” has made us rethink what both shelter and place really mean. We have found richer meaning in both words, since all this began.